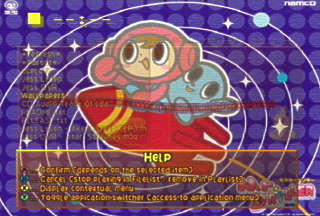 This amazing piece of software turns your Dreamcast into a versatile music player with options galore. Not only that, but with the Jess Lysen edition, you get 3 bonus, completely remixed tracks in MP3 format: Akano Deep, Bobble Trax & Revival. Plus 50 Atari ST tracks & an Amiga one also.
DCPlaya lets you play all the following formats: MOD, S3M, SC68, SID, Ogg-Vorbis, MPEG Layer 3 & Audio CD. Not only that, but you can also use your own background wallpaper images, and these can be added in amongst music tracks on your custom play lists. Basically 640 × 480 pixel JPEG images. I think it also supports the Targa format.
You also get the choice of 4 different visual plugins, one of which has various shapes that change to the music, a space ship flying over some pink looking terrain, the Hyper Pipe, I think it’s called, and a green 3D looking graph kinda thing. Or you can turn them all off if you don’t want any display. Adding to these spiffy on screen displays, you also get action on your VMS, and here you can choose between display types as well. Being a LCD, it can get quite blurry at times when it’s updating quickly, but it’s a totally cool feature anyway. 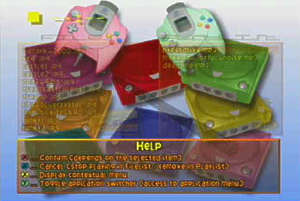 MP3 files, modules and the Amiga & Atari ST tunes give you track information, if it’s been included in the file, and you can choose whether or not to display this on the screen at the bottom. The song browser appears on the left of the screen and displays the usable contents of the CD along with various other bits of the Dreamcast, such as the VMS and the RAM etc. Simply enqueue the files you want to play, and they’ll pop up on the right in the order that you select them. Press the “A” button on the 1st item in the play list, and it’ll set things going. If you want to play singular tracks, or images, you can do that also simply from the song browser on the left. Pressing “B” stops the playback.
You can also view text files with DCPlaya, although, if you view the ones on the CD, they appear to have some ZML format to them, which looks similar to HTML. I’m not exactly sure what the deal is with them. There’s also a console area of the software, which can be brought up using the F12 key, I think, on your Dreamcast keyboard. Presuming you have one that is. I think there’s a virtual keyboard that you can use with the control pad too, but I don’t remember now. Most of the main stuff is controlled with the standard control pad anyway. Just make sure that if you do have a keyboard, to keep stuff off it while using it. I have a nasty habit of resting control pads & the like on it, and sometimes things happen that shouldn’t. ;-P
I had a bit of trouble getting these screen shots, ’cos my video capture card didn’t like the output from the Dreamcast that this program told it to do. It looks like it was along the line of the 60 Hz PAL mode, ’cos I tried NTSC, and that fouled things up even further. Anyway, the 1st image shows you a wallpaper of Mr Driller that’s included with DCPlaya, and the 2nd one is a wallpaper I made up of colourful Dreamcasts & controllers.
The Nero image is around 35.4 MB unzipped, and I used an 8 cm sized CD to put it on. The current version is 1.2, so it might be bigger or smaller than version 1 that I have.
A most handy feature also, is that you can swap over to a new CD to play more songs, and it will still keep the current background also. You don’t need the DCPlaya disc with all its files in order to use it. Once it’s loaded up, you can take it out.

All in all, this is very good quality software. It’s well presented, easy to use, and best of all it’s completely free! This is perfect for taking with you on short holidays, seeing as the Dreamcast is relatively light weight, and you can simply connect it up to a T.V. wherever you go. Although it’s not really intended for doing so, this software is nifty for doing simple slide shows of your pictures as well. Although you do get the time display remaining on the top left corner. But it’s something that can be done with it, and you do get a bit of a delay between picture changes. All in all, it’s worth downloading. I’d definitely give it a 9 out of 10.