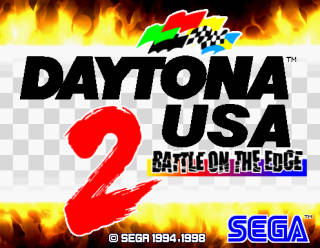 Step back to 1998, when arcades werent so sparse, and you had the brand new, and very exciting Daytona USA 2: Battle On The Edge, sequel to the exceptionally popular original. In fact the original game was so successful, that the 2nd game never topped it. Sega however had still made a vast array of improvements in nearly all areas. The driving style though is quite removed from the original. It's now all about power sliding at insane speeds around some of the nastiest bends and driving on the edge of control. This becomes most evident by the games tracking of speed records through various turns.
Gone is the Hornet car, (until it returned in the Power Edition) and in come 3 new stock cars. The happy Chums Gum beginner one, the Scorpio Plasma Batteries normal car and the Phantom hard dealie, which offers the best power sliding and speed. The tip to winning, as the game tells you, is to tap the brake in the turn, then slam on the accelerator to drift around the bend. This is easy to understand, but it requires a lot of skill to actually master the technique. It feels quite different to the likes of the more recent OutRun 2.

Graphically, this was the most incredible thing around back in its day. The tracks were bold, colourful and adventurous, something that seems to be lacking badly in more recent racing games. The beginner course in the Battle On The Edge version was one of the most beautifully designed tracks Ive ever seen, and its a bit of a shame it got replaced with a less impressive design in the Power Edition version of the game.
Speaking of the Power Edition, it did add the ability to play a huge linked up course, where you raced through all the tracks. This was similarly done in OutRun 2 on the XBOX.
Unlike the 1st game, bits of your car can now get bashed off, and enemy cars can be reduced to flaming wrecks. I think this is a fab addition to the game. ;-)
The music this time, was done by some group called Winger, who were actually from America as well. The tracks are Sling Shot, I Can Do It and Skyscraper Sequence.
Apart from getting to grips with the power sliding, the rest of the driving is as easy as pie. Colliding with other cars wont wipe you out, luckily, but ramming them up the rear will slow you down.

Graphics: When this came out, youd be drooling all over the place. These days the road textures a bit blurry, but theres still some pretty cool stuff in there. The Advanced course is probably the most varied. The cars are nicely textured as well. The position counter has a cool slot machine thing going on also. 96%
Animation: Flying birds, waddling penguins, that huge swinging ship, bats, flapping flags and a beautifully smooth frame rate make this incredible. The flaming title screen is pretty cool as well. 90%
Sound: Im not sure if I like the music quite as much as the 1st game, but its still pretty good. The crunching noises, engines and tyres skidding are all great. The Advanced track probably has the most ambient effects. 88%
Playability: Tricky to get to grips with initially, especially if you expect it to be like the original game. Maybe thats a downside for some of you, but with a decent bit of practise, youll see how good this is too. 85%
Lastability: Getting better lap times and speeds is what will draw you back, and with up to 16 cabinets that can be linked together, the fun of racing other real people is a neat attraction. 91%
Overall: An awesome racing game with sensational features and a good learning curve that will keep you challenged. 95%