Genre: RPG. (Mostly turn based. Although you can sometimes force enemies to avoid having a turn.)

Memory Requirements: 9 blocks (per save) 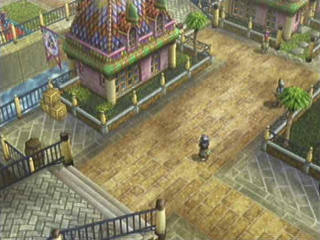 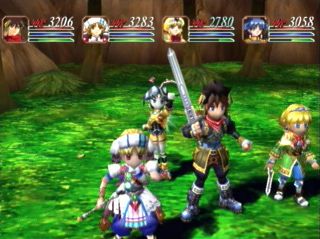 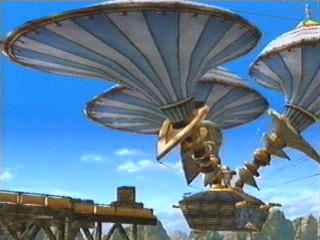 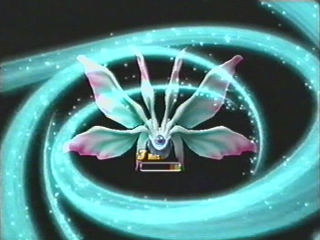 The version of the game that I’ve got is the American one, but I don’t think it’s actually got any differences that I know of. It was interesting to note though, that when I loaded the game, it actually runs in the PAL 50 Hz mode, like Puyo Puyo Fever does, which suggests that when you’re using a boot disc, the game just “presumes” that it’s running on the hardware it was meant to, or something, and doesn’t need to set the output mode, or whatever, so it’s like the Dreamcast’s just cracking off its default setting. Maybe something like that. Then I suppose if you had a switch in the console to set the region, it would change the output to NTSC or PAL accordingly perhaps.
Graphics: The characters are kinda simple looking, but there is good attention to detail especially in some of the surrounding environments. You’ll find nice looking trees, buildings, some great looking fire, nifty magical special effects and a typical style that seems to run throughout everything. The lighting effects are really good, where you’ll notice nice smooth gouraud shading, and in battles, bright glowing effects stretch the characters’s shadows off in believable perspectives. The shadows change between battle areas and simply wandering around the towns. In a battle they’re sort of soft looking hexagonal shapes, but in towns they’re more simple ovals, kind of like in Skies Of Arcadia. You’ll also spot shadows that are coloured from transparent bottles and so forth, which looks neat… A lot of the special effects use videos also, with an alpha channel, so that you end up with some quite complex looking effects at times. All in all, it looks pretty solid, and you won’t see any clipping or fading in scenery, due to the isometric camera angle at most times. The texturing is well done, and doesn’t have a lot of noticeable edges. In a lot of the rocky scenery, and grassy coverered parts of land, it seems to wrap believably around it. In one particular area where you climb up and down rock ledges protruding from the cliffs, you get the feeling that they really are carved out of the rock, rather than looking as if they’d been glued on. The videos use the MPEG format, and SFD, so they’re all of really good quality, as you’d expect. 89%
Animation: The animation is always really smooth in all the real time stuff, although some of the videos seem to be noticably slower. The White Apocalypse one of Elena’s seemed as though the Dreamcast’s drive couldn’t keep up when doing the audio. The water effects seem quite smooth in all the areas that they appear also. Generally it’s pretty good. 90%
Sound: The music is excellent in Grandia 2, composed by Noriyuki Iwadare, and each area has it’s own theme, kind of like in Skies Of Arcadia, I suppose. It’s a pity that the soundtrack CD wasn’t as comprehensive as I’d’ve liked. (You need to get the additional Povo and Melodia CDs to get everything.) The speech is clear, there’s some top notch footstep sounds, and lots of variety in all the other miscellaneous effects, including ambient noises. 95%
Playability: It’s easy to get into, although at times it can feel quite frustrating when you’re itching to find out what happens next, and you’re plagued by what seems like endless battles. Being able to restore your attributes at the save points is a nifty idea also. 80%
Lastability: The game certainly keeps you interested in what’s going to progress in the story line, and at times I felt really absorbed by what was going on. You often feel quite a lot of emotions, happiness, excitement and especially despair… There’s a lot of areas, where you just want to get passed a bunch of monsters and so forth to see what’s going to happen next in the story. 96%
Overall: Grandia 2 is certainly a great RPG, and there’s some pretty solid gameplay and story line to be found. If you take your time, and search all the areas, do every battle you can, and talk to everyone, you could be looking at over 50 hours worth of playing. It can be a bit annoying in some places, but if you stick with it, then it becomes more rewarding. 91%