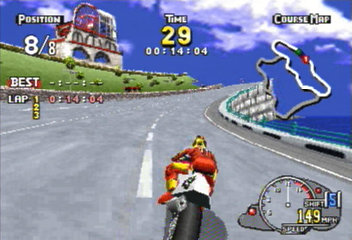 I stunk at the arcade version of Manx TT. That bike was a pain to use, so it’s just as well I don’t really drive a motorbike, but then again, Im not a fan of them in reality anyway. I picked the Saturn version up though at Cash Converters for $12. With only 2 tracks, of which both share a piece of each other, theres no way I would have paid more when this came out. The conversion though is fantastic. The frame rate is smooth and the graphics look great. For ghosts, this uses a big fat wad of your back up memory cartridge. About 1880 blocks I think. I dont even have that much room, so I dont have any ghosts saved.
Luckily in terms of lastability, you can go around the tracks in mirror mode also, and probably backwards. You get a sunset sky for this mode.
The speedometer is stuck in miles per hour unfortunately. So unless you’re a human calculator, multiplying it by 1.609344 all the time doesn’t really happen.
Playability wise, the bikes handle fairly well. Sometimes they seem a bit unpredictable and you end up over steering or under steering. In the Saturn mode, you can choose from a variety of differently coloured & handling bikes.
Background detail is pretty good, with crowds of people, nice looking buildings and even life saver rings on the lamp posts by the sea.
In the Challenge mode you’ll need to complete the Laxey Coast track before moving on to the T.T. track. Practise mode will let you get the hang of both before you attempt the other.


The game supports the regular Saturn control pad, the analogue pad and a steering wheel also. Although I found the pads to be more to my liking. All in all, if you enjoyed the arcade version, youll probably really like this Saturn version too. Otherwise the 2 tracks are a bit short in terms of replay value. If you can pick it up cheap like I did then check it out.
Graphics: A pretty well done conversion from the beefier Model 2 board original. Most of it looks fairly similar. 90%
Animation: Smooth as your girlfriend! 95%
Sound: Good motorbike noises and that same clankety-clankety-clank noise as the arcade version when you rub your bike down the walls. The music doesn’t really stand out as memorable though, except for a bit in the attract mode. 86%
Playability: I reckon it’s more playable than the arcade version, since I couldn’t get to grips with the bike. On some of the corners the bikes feel unpredictable though. 81%
Lastability: With only 2 tracks, Manx TT wears thin quite quickly. While it is supposed to be about the Isle Of Man, it wouldve been nice if Sega couldve added in a dozen or so other courses too, even if they were just made up. 50%
Overall: One for lovers of the arcade version primarily. For all its good points, it just seems a little too short in terms of tracks. These days you should be able to get it pretty cheap anyway. 75%