The Marvel vs Capcom 2 (New Age Of Heroes) Review. 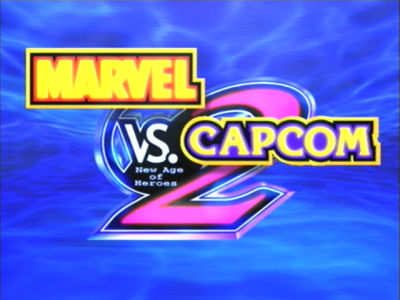 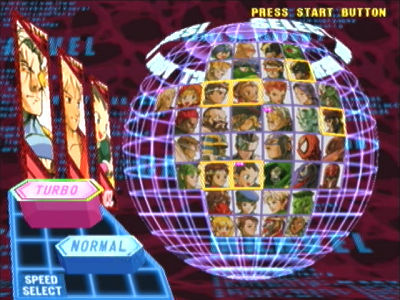 Capcom really knocked things up a notch from the original Marvel vs Capcom, with more characters, flashy special effects and amazingly well textured 3D backgrounds, somewhat similar to Power Stone in areas. That said, the game still retains the 2D style fighting formula that just works so well as it is. The resolution has been knocked up this time as well to 640 × 480 pixels  the usual sort of Dreamcast stuff. Although the characters and other 2D stuff seems to be in the usual lower resolution. So its just like a lot of earlier fighting games of this style, although with flashier backgrounds. The conversion, as youd expect, is spot on, since the arcade hardware is pretty much identical anyway. As well as the arcade and Dreamcast versions, I have played this on the XBOX as well, and its exceptionally good too.
Unfortunately my copy didnt come with any instructions, because it was left in the 2nd Dreamcast I bought.
This time around, you dont pick a Guest Character; you pick 3 fighters, all of who you can use, by changing to them during your fighting. Combos kinda feel a lot more psycho also, I reckon. On a level 3 combo gauge, you can unleash all 3 of your fighters on your opponent, resulting in some devastating damage if you do it right. Big combos mean big points as well, and you can rack up some incredible scores. As with the previous Marvel vs Capcom, characters who are not active will slowly regain health, but only up to the end of the red part of the health bar. You also get various points after each play, which will help you to unlock all sorts of new goodies. You can save these up for characters you want, but the stuff available changes around from time to time. These are available from the shop in the Secret Factor area of the main menu dealie.
This time the game automatically loads and saves from your VMS, so you dont need to remember to do it yourself. The game probably supports the Arcade Stick, but as I dont have the box, I cant be sure what works and what doesnt.

So if its great fighting youre after, you cant go too far wrong with Marvel vs Capcom 2. If you can actually still get your hands on this, pick it up straight away!
Graphics: Great new transparency effects, 3D backgrounds, light sourcing and lotsa funky stuff going on. The 2D character sprites all look fab too. 94%
Animation: Theres lots of great noticeable background movements, and the characters all perform quite smoothly too. The special effects and 3D parts are particular smooth. Not as smooth in 50 Hz as the 60 Hz mode though. 97%
Sound: The effects are just as good as last time, and I like the music better this time around. The ending music is quite laid back sounding. The announcer sounds like Ray Warren. 90%
Playability: I preferred playing the original I think. Some of the stuff seemed a bit more nicely done. 93%
Lastability: With so many more characters, your playing will get a good extension, especially if you want to unlock and master all the available fighters. 90%
Overall: Definitely an improvement on the original, yet the playability of the original Marvel vs Capcom should have you getting both games. Excellent stuff! 92%