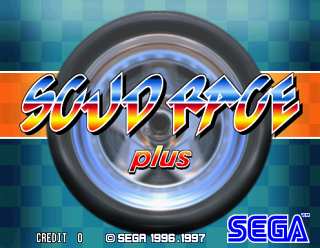 I don’t know what it is about this game in particular, but I’ve always had a thing for it ever since I first played it. SCUD is an abbreviation for Sport Car Ultimate Drive, and the title for the game in America was Super GT. This excellent AM 2 racer was labelled in a video ad I saw as the sequel to Daytona USA, but later, Sega released a sequel actually called Daytona USA 2, as you probably know anyway.
The original 127 cm screen deluxe version was the 1st version of the game which had all races with 40 cars, and was later modified for the 73.7 cm screen twin type version with variations in car difficulty, and new numbers of cars for the entire race. The game was then added on to again later as Scud Race Plus, which featured an extra oval track — Super Beginner — in the form of a house, where by the cars had shrunk to the size of toys. By holding the Start button and selecting one of the cars, players could select between hidden vehicles, including a cat, a tank, an “AM 2 crew” bus and a rocket car, which were all a bit of fun. This was the only track (I think) that allowed you to do so, and I had a bit of a smirk to myself when I confused a challenger I was taking on at Intencity once, with one of the secret vehicles.
The other 4 tracks in the game were Beginner (Day), Beginner (Night), Medium & Expert. The day time beginner track started off on a large brigde, which led into a kind of board walk area. Just before it was a building crossover point which featured a giant spinning Saturn logo. If you looked carefully on one of the walls leading into the underwater tunnel, you could spot Sonic in his red sportscar. The same picture appears in Sonic Jam in the art gallery area. The most impressive looking track to start on is the Medium track, which had you facing a giant wall, with fire in various areas, leaping up, and a big face carved into the rock. You then drove ahead and it dropped off underneath all of this as the track dipped down. It was pretty jawdropping.
The 4 original track names are: Dolphin Tunnel, Twilight Airport, Mystery Ruins and Classic Castle.

Running on the Model 3 step 1.5 board, Scud Race can also be run, apparently, in the same cabinet as Daytona USA 2, with a simple board swap. The reverse does not apply however. The game was also rumoured to appear on the Saturn with the enhancement cartridge that would also run Virtua Fighter 3. This never happened, and was then planned for release on the Dreamcast. Apparently the game was up & running pretty well on a development kit that was only about 20% complete, but Sega sadly never released the game at all on console, and I believe have stated that they never will.
The Model 3 board produced an image resolution of 496 × 384 pixels, and displayed polygons at a rate of 1 000 000 per second. This fitted it in some where between the Saturn & Dreamcast in terms of polygon output, although instead of drawing triangles, it was designed to draw 4 sided polygons.

The game features 4 cars for you to drive: The McLaren F1, Dodge Viper, Ferrari F40 & the Porsche 911. The handling of the Porsche, and Dodge Viper is probably the best, and it drops off as you tackle the 2 faster cars. If you were cunning enough to drive with manual transmission, you could squeeze a bit more juice out of your vehicle, and possibly score yourself a better ranking.
As usual with AM 2 games, you have 4 views to choose from when racing and the gorgeous big cabinet provided force feed back and a roaring sound system.
The introduction video to the Plus version of the game was somewhat memorable, despite being a bit jerky. A video showed a shiny red sportscar that zipped out from a city area and through the Coliseum (in Rome), despite the no entry signs, which then sped out from the other side. The Coliseum then proceded to collapse with stone blocks falling down.

Music came in the form of some pretty funky tunes including Groovin’ Daylight, Flight In The Dark, Ancient Voice, and Breeze Of The Middle Ages. (Plus Merry Maze I think, for the Super Beginner Course in the plus version)
All in all a spectacularly designed racer that I feel has been neglected and forgotten now. If you do manage to find it - have a play, and see what I’m on about. You won’t regret doing so!

Graphics: The Model 3 board ruled the arcades as the supreme hardware & when this first came out, the graphics were absolutely untouchable. Even now it still looks pretty fine, despite the likes of new racing games. The car detail is great, and you can even spot the driver inside holding the wheel. The tracks are gorgeous, and being designed by the likes of Toshihiro Nagoshi, they are something spectacular as far as layout is concerned. 92%
Animation: Being arcade hardware, and specifically written for the Model 3 board, Scud Race never drops off to anything below 60 frames per second. You’ll also notice cool background animation in terms of chasing lights, the spinning Saturn logo, fire effects, flapping banners and fish swimming around underwater. Nice. 98%
Sound: Great music - not as memorable as that of Daytona USA & Sega Rally, but still pretty cool anyway. The sound effects are top notch, and if your arcade dudes have cranked the volume up on this, it sounds pretty nifty. 94%
Playability: Scud Race is by no means a game you can just get into once and finish. It demands that you know the car handling and the tracks, and your opponents also. With a bit of practise you should be able to complete the races with a not too shabby position. I must admit though, the force feedback used to make my hands quite sore from fighting with the cars. Maybe some of the arcades had the force feedback power cranked up a bit high. None the less, my score will stay the same for now. 95%
Lastability: Having withdrawal symptoms makes it hard to comment on this category, but it’s definitely a good rating. Improving your times is generally what you’ll be doing once you become pro at it, and if you’re lucky to find an 8 player setup, round up some mates, and give it a go. 96%
Overall: An awesome beast of a game that should still be in all good arcades. It’s a bit hard to find it now. When Intencity at Pacific Fair in Queensland existed, they had both the original and Plus versions. If you’ve played it and loved it, it will eat your coins like a starving monster. I miss playing this game so-o-o-o-o much, and perhaps I would adore to own it, but the fact is that it weighs about half a tonne, and is worth around $7000. Ouchy. 96%

 As I said above, press Start while selecting your vehicle to turn it into a tank, cat, AM2 crew bus or rocket car, depending on the car of your choice. I think this only works on the Super Beginner track, but Ill check it out. :-P When racing, you can use Start again to shoot the tank cannon, speed up the rocket car and possibly other stuff with the other choices. The Ferrari F40 is the tank.
 To get the Time Lap mode, hold start during the transmission selection screen.
 Hold Start on the course selection screen to get the mirror mode.
 On the Dolphin Tunnel track, you can pretty much go full speed up until the right hand turn in the 2nd tunnel. Here you need to drop it off somewhat, and on the turn after, which leads back to the Start line.