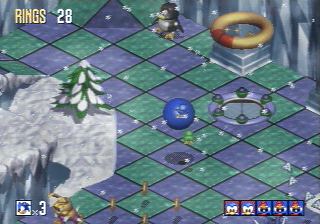 This page has been on coming soon status for the last 3 years according to someone who kindly wrote to me and told me about it, so now here it is, finally!
Sonic 3D: Flickies’ Island, is the updated Saturn game of the Mega Drive version, that was called Sonic 3D Blast, created by Travellers Tales. This was the same group responsible for the amazing looking Toy Story game on the Mega Drive also. The new features on the Saturn version of Sonic 3D include textured areas that were simply plain colours before, as well as a completely new 3D polygonal bonus stage that was programmed by Sonic Team. (The Mega Drive and PC versions are completely different to this and each other.) Also, a neat looking mist effect for various levels, plus the inclusion of redbook audio tracks on the CD, which are completely new. (Hence why I never picked up on the similar tunes in Sonic Adventure to the Mega Drive version of this until a lot later.)
The main idea of the game is to take out the 5 enemies in each area, and collect the Flickies which pop out of them, then taking them to the Dimension Ring which will send them safely on their way. Some of the Flickies are easy to collect, and others can be difficult if you don’t get them straight up. The red ones for instance bounce all over the place, and need to be grabbed as soon as you can to avoid making it awkward for yourself. Of course the Flickies need protection too, and brushing them on jets of fire, getting yourself frozen or hitting spikes, will send them flying, which means you need to collect them up once again. Luckily, when you pause the game, the map screen will show you where any lost Flickies are. Once you’ve deposited the Flickies through the Dimension Ring, you then progress onto the next area. The final Dimension Ring will teleport you up out of the stage and onto the next, or in the case of Act 2, you’ll then go on to face Dr. Robotnik.
Sonic’s on his own this time around, but you will find Tails and Knuckles hanging about in the levels, waiting to take you off to a bonus stage. Finding either of them will send you off to collect the obligatory Chaos Emeralds, and going again will get you a 1 Up. But on finding them, you’ll need to have 50 rings before they’ll take you anywhere. Once you return, you can go back and collect pickups and rings that were there before, a 2nd time around too. In most cases they’ll be hiding in some tricky place, although on the Spring Stadium level, both of them appear together in the same spot.

At the end of the stage, you’ll notice that you get extra points for finding Knuckles and Tails, plus a Flicky score, and the usual time and rings points too. Getting all 5 Flickies in the Dimension Ring at once gets you a better score also. Collecting 10 medals gets you a continue. You’ll find these mostly above springs, and you may need all 5 Flickies at once to collect the high ones. You can even get them in bonus stages after getting all 7 Chaos Emeralds.
You’ll also find the usual monitors, with invincibilty, speed shoes and shields. There are 3 types - a blue one that will take an ordinary attack, or electrical damage, a red one to protect against fire, and to allow Sonic to walk on lava, and a yellow one that allows him to do a blast attack. To do this you just jump twice near an enemy, and Sonic will lock on and take the enemy out. Much easier than jumping directly. Of course some enemies with spikes will destroy the shield, if you’re not careful.
All up the game is fairly good, with 7 stages, and some rather interesting bosses. I think perhaps it could’ve benefitted from some sort of save dealie that allows you to remember where you’re up to, because it can take a while to get to the later levels, and you’ll need to dedicate a lot of time to it in the one sitting. Some areas can be a bit frustrating if you don’t know what you’re doing, and often judging where Sonic will land is a matter of carefully watching his shadow too.

Graphics: All in all it looks really well polished. Because it’s really 2D, there’s no pixelation, (well apart from the 3D bonus stages,) and the neat weather effects, and colourful environments really make it look quite nice. There’s also some neat transparent effects if you know where to look, such as the last 2 bonus stages’ floors, and the final boss. 80%
Animation: There’s some great looking flowing lava and snow effects, plus characters, rings and so on are all very fluid. The 3D bonus stages are all really fast aswell, and the scrolling is deliciously smooth. 98%
Sound: Great sound effects in all areas, with various enemy noises, ambient effects and excellent music as well. 92%
Lastability: It’s certainly enjoyable, and the bonus stages are heaps of fun, especially when you go rolling down hills, and spiralling into new areas, bouncing off springs and so forth. 74%
Playability: At 1st it can feel quite awkward, and Sonic feels a bit out of control, but you’ll pick up on it soon enough. I feel the analogue pad is best for the main game, and the digital one for the bonus stages. 76%
Overall: Personally, I don’t find Sonic 3D as good as the likes of the original 2D games, but it’s different, and has its own positive features. That good old Sonic speed seems to have become more sedate, and you find yourself deliberately going slow, because at times it’s awkward to know what’s coming next. 70%

At the title screen, press Up, Right, A, C. During the game, pause, and then press A to skip an act, B to skip a whole zone, C to skip right to the end, X for an extra life, Y to get a medal and Z to get all the Chaos Emeralds.