Go To The Sega Page. 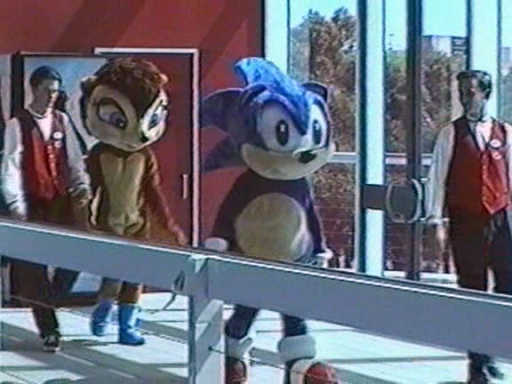 Back when a friend & I went to Sega World (in Sydney) one day, my Dad decided to record people dressed as Sonic & Sally, while he waited for us to reappear, probably for lunch. It was in January 1998. So it wouldve been during the school holidays. Anyway, this is the new updated video! The original was a bit brightened up and lacked a bit of contrast, but with this new one, Ive done better colour adjustments to keep the contrast, while just nudging up the gamma, and adding some more saturation. Plus, its running at 50 frames per second, instead of 25, so its twice as smooth! If youd still like to see the older video, which was done in 2005, you can request that from me, and its also over at DeviantArt still.
Speaking of DeviantArt, people had taken an interest in this video there, and my Sonic & Sally statue photo, but as you have to have an account there to download anything now, Im offering it here as well. If you do download this video, DO NOT re-upload it anywhere else without getting my permission 1st. Somebody already pinched it and stuck it on YouTube without any credit, and I had it removed. That said, I do ask you to save a copy to your own computer, rather than watching it over & over from where I have it hosted, because Im pretty certain I have a data transfer limit. Private sharing with your close friends is okay, but make them aware of not uploading it to other sites on the web as well, without my permission. If you have issues downloading (such as nothing happening), it might be my hosts server panicking over your browser. Try a different web browser, or download manager if you have issues.
For those of you who didnt know, the entrance to Sega World wasnt on the ground floor. It was up on another level, and there were stairs and escalators, and probably a lift somewhere, to get up there. They had a shop inside the place, and if you asked nicely, theyd sometimes let you slip in there without paying the main entry fee. There was also a shop downstairs, which was bigger. It was here that they had demo Saturn consoles running, the plush toys, key rings and what not. But things changed around over the years, so some people may remember it being different. They also moved some of the arcade games into the downstairs shop too.
If you head to my DeviantArt gallery, you can see photos of the Sonic & Sally statue, which was by the water, and the one of Knuckles on the opposite side of the building. There was also a statue of Tails, but I never got a photo of it, sadly. I also have some pictures of other stuff from Sega World in my gallery, such as the wrist band, brochure, my T-shirts, plush Sonic toy, a letter and plastic bag.

 I dunno what the fig is going on over at DeviantArt these days  my Sonic & Sally statue picture has now somehow been marked as mature content, & I cant turn it off. Its this kind of cr@p & a lot of other issues I have with that site which explains my lack of presence over there now. Anyway, for those of you having issues seeing my photo of the statue of Sonic & Sally at Sega World in Sydney, here it is here again.

If youd like to show it for non-commerical purposes, please contact me 1st, and Im sure we can work something out if you discuss your intentions.

I may also consider (real, paper) magazine articles with proper credit and a link to my site here, and I have a TIFF version of the photo too, which obviously has no compression degradation. Like the video, dont upload it anywhere else without asking me. Its like a couple of e-mail messages, so thats not too long to wait, if you ask me, and I check my mail every day pretty much. But yep, download and enjoy for your own personal use. Like for your computers wallpaper, or a picture in your bedroom. Thats fair enough. If you wish to point other people to the photo, please link to this page, or better still, the top level of my site, then just say to head to the Games Page, Sega, and then this Sonic @ Sega World one. Its like 3 clicks to get here from the top.

to the Sega Page.