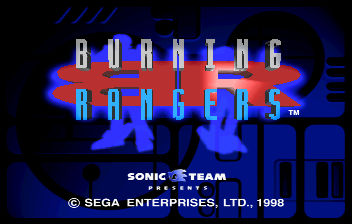 Sonic Team started a new genre with Burning Rangers — a fire fighting game!
This brilliantly appealing game will have you setting out on 4 big levels, that actually change randomly in some small way, through over 3000 possible combinations every time you play! Many poor victims of nasty fires breaking out, have become over come by smoke, or may be unconscious, and as a member of the Burning Rangers, it’s your job to rescue people, and at the same time, put out fires before the danger level peaks to drastic levels.
Throughout the game, as well as rescuing people, you’ll need to collect the Maztabaluxor Crystals (I think that’s right,) scattered throughout the levels. These crystals maybe floating around the joint for you to pick up, or from a blast of your fire extinguishing gun. The crystals are generated by putting out the fire as some kind of by-product. Red ones are worth 1, and green ones are worth 5, so it’s worth keeping your eyes peeled for those more juicy ones. ;-) As with Sonic and his rings, retaining at least one crystal prevents you from being harmed by the fire, however, in order to rescue someone, you’ll need at least 5 crystals, and up to 10 will be used if you have them. Youll then get a continue.
Being the excellent programmers that they are, Sonic Team have managed to put in all the cool graphical touches that you’d come to expect from them. Running on a modified version of the NiGHTS engine, Burning Rangers includes some spectacular looking fire, varying through different colours, depending on its fuel source. You’ll notice the standard orange fire, cool shades of green, blue & even pink. The real time coloured light sourcing gives an excellent look to the levels, and characters are naturally affected by this and the shadowy areas. Mission 1 has a cool green torch light effect that kicks in during a power failure that looks quite nifty. You’ll also find some slight fade in effects on some of the scenery, which eliminates drastic pop up. On Mission 2, when you’re playing as Tillis, one cool area has you seeing Shou through the glass floor. It gives a nice feeling, along with hearing the other Burning Rangers conversations, that other things are going on with them, and that it’s simply not just you roaming around by yourself. From time to time, you may even run into another Ranger, and a story section will take place.

If you have the misfortune of coming in contact with any of the fire, you’re hard earned crystals will scatter all over the place. You’re best bet is to put out the fire as quick as you can, and regain any of the crystals that have gone flying. Although, if you charge your extinguisher gun thing up to the max, youre gunna blow the crystals apart. On the top right is the limit graph. At every 20% interval, fires will break out uncontrollably around you, and get worse at the higher levels. If it hits 100%, they will not stop at all. The more fires you put out, the slower the limit will rise, and the higher rating youll get at the end of the stage.
Various doors throughout the levels have colour coding. Blue doors will always let you passed, yellow ones tend to be unlockable and red doors will not let you by. Various glowing controllery switch doodads will also unlock shutters in certain areas too.

After playing through the game, and as you rescue new people, each time you play, you’ll receive mail from some of them. This can be interesting news, and from some, you’ll receive something extra, such as passwords for the game, or even artwork. Keep your eyes peeled for lead programmer, Yuji Naka. He’ll need rescuing also.

The end of level bosses are quite spectacular, also. At the end of Mission 1, you’ll take on some mutant flower, a large peculiar fish like creature in Mission 2, and at the end of level 3, uh, well, I’m not too sure how to describe that. The final mission, is certainly a big one and you’ll be out to rescue Iria Klein, a cute green haired girl who’s been in a hyper-sleep chamber while a cure for her disease is found on Earth. Unfortunately, she’s been in this state in an orbiting space station kind of thing, which has sucked in various bits of junk, and other odds and sods floating about in space, and created a defensive shield for her. Your only hope then, is to get inside & rescue her. On this final level, you’ll unlock a sub game, where you fly the “Burning - Ship” through lots of tunnel areas and through tight gaps. The boss on this last level comes in the form of Wilvern, a nasty beast if ever you saw one. He has 2 stages, in which you must beat him, the 1st being quite easy, and the 2nd more of a challenge. With correct timing and skills, you’ll have the whole deal down pat in no time at all.
Tip: On the final mission, switch to the digital pad (, + mode,) on the controller for more precision when walking on the thin, high platforms.

The ending’s pretty cool, and as is usual with a lot of these Sonic Team games, is quite long, with lots of pics and what not. I got this back in around the middle of 1998 at the same time as Panzer Dragoon Saga, so it’s getting on a bit now, but none the less, it’s still rather cool, and considering it’s one of the few fire fighting games, it still must hold around 1st place for that kind of genre.

Graphics: Quite frankly, some of the spiffiest stuff ever seen on the Saturn. Up there with the likes of Sonic R, Panzer Dragoon Saga, Grandia and Shining Force 3. There is a little bit of flickering on some of the graphics, and in some instances you can see through the walls. The underwater sections have cool bubbles and wobbly polygons, and the textures on top of the water are pretty decent too. Great real-time coloured lighting, used lavishlingly on all the levels, and lots of transparent stuff that always looks spiffy. 97%
Animation: Running at almost 30 frames per second the whole way, the game is reasonably smooth in most places. The character animation is pretty good and the fire moves fluidly also. There are a few areas though where it slows up quite a bit. 87%
Sound: Cool voices, some a bit lame, and a great soundtrack with mood setting tunes also, and suspense building melodies. The roaring fire sounds nifty, and the cool sound your gun thing does when you shoot it at the fire. Nice foot step sounds also, that change depending on what surface you’re on. 94%
Playability: Reasonably easy to get into, but iffy camera work at times and characters that sometimes run away on you in odd directions makes it rather frustrating. 75%
Lastability: With the heaps of people to find, and scores that you can come back & improve also, you’ll find this lasting for quite some time. 90%
Overall: A cool new type of game that’s amazingly addictive to play, and has all the right stuff in all the right amounts. A game you’ll never regret owning, that is if you can still find it to buy. 92%

Check out my quirky picture of Tillis which I drew on the 1st of January 2012.