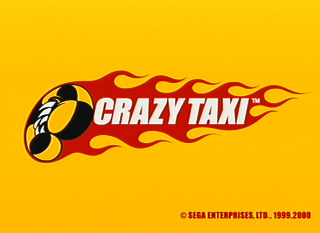 Forget the obviously blatant rip off that is “The Simpsons Road Rage” on the XBOX, this is the original Taxi driving game. (Sega have sued the makers of this also.) When I first saw the arcade version of this, I thought it was quite, um, unique. & it is. I dont know if you could class Crazy Taxi with racing games, because the idea here, is to rush customers around the busy streets of San Francisco, racking up money as you perform insane driving manoeuvres. From Crazy Drifts, to Crazy Jumps & Throughs, you simply have to hoon about with your passenger in the cab, and deliver them on time to their destination. Its not a slow Sunday drive, either, and its not a case of ploughing through anything that crosses your path. Time is always important, and the better you can dodge the thick traffic and other obstacles, the more time youll have to continue on with picking up more paying clients. Take short cuts over the back of trucks, and use them as a jump to clear traffic and other things that get in your way.


Besides the standard arcade mode, the good guys at Sega have included another additional track for you to drive about on. Plus youll also find the Crazy Box mode, which contains a bunch of missions, requiring you to pull off various tricky tasks, usually within a certain time. It works in a fashion where by the next stage is unlocked only after you complete a previous stage.
The car handling certainly isnt like a simulation, so its quite easy to get into, and unlike reality, you can treat your cab roughly, smashing into phone boxes, signs and what not, to stop yourself quickly when dropping off passengers. Slam on those brakes and get into reverse for other areas that are a little less dense.

Graphics: Awesome looking environments with heaps of detail. The streets are jam packed with other vehicles and the taxis look great. Every time you see those bright yellow cabs, you think “Crazy Taxi.” Excellent quality visuals and despite only 2 main courses, they are huge. There is some pop-up of distant stuff, but still a perfect conversion from the original one that youll find in your arcade. 97%
Animation: Were talking 60 frames per second here, although there is slight slow down through the trees near the yacht harbour and that café you can drive through. Whack it in the 60Hz mode to ensure smoooooth play all the time. 98%
Sound: Great music tracks, even if there isnt a great deal in variety, and some nice clear speech. Cool engine sounds and what not too. 96%
Playability: At first, like most games, it will take some time to get the hang of what youre supposed to be doing. Once youve mastered the tracks, youll have those customers rolling in. Some of the Crazy Box stuff can be quite a challenge, and the various boosts that youll need to use with your cab can require some presice button pressing. 87%
Lastability: It may not have a 2 player mode or the like, but youll still want to challenge your friends for the best cash scores. With only 2 main tracks, it still manages to offer a lot of replay value. The key here is to keep coming back to improve. 80%
Overall: Another unique game from the big dudes & dudesses at Sega. Fun and action packed. 91%

Cheats:
To enable Another Day, where you start from a different part of the city, press R Shift, and then a 2nd time as you pick your driver.