This spiffy racer was the bonus game I got with my Saturn. What can I say, initially I was gobsmacked by it. Here was Daytona USA, running in my own house. It was amazing. Despite the absolutely shoddy frame rate, and borders that took up nearly half the screen, with more pop up than a 4 slice toaster, I was stunned, because at the time, I’d never seen anything like it. Except at the arcades. The game actually runs in the Saturn’s 352 × 224 pixel mode, which is an 11:7 aspect ratio, where as the arcade version was 31:24 at 496 × 384 pixels. 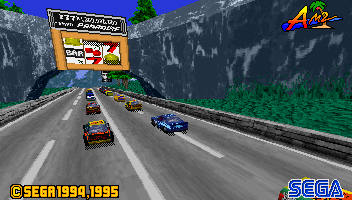 Daytona USA has you zipping around in stock cars at over 300 km per hour, and on some of the coolest designed tracks yet.
Despite only containing the 3 original arcade version tracks and no 2 player mode, it does contain quite a few cars, and some horses! Well, the cars all look the same, but they are coloured differently, and they do handle in a different manner to each other also. Your black automatic & orange manual cars don’t slow down on the walls, but slip and slide all over the grass, the reverse is true for the automatic green car, and the manual pink one. The light blue & light yellow cars have tricky handling, but they go pretty super fast. You simply need to find a good car for each track and what suits you the best. The horses are also good for driving on grass, obviously. See if you can unlock the baby horse combo!
The tracks are spot on with the arcade version in terms of layout, but they’re missing features, such as the traffic lights & wires on the Expert course. The 3 original tracks would hardly hold up these days, with racing games that have a whole bunch of tracks, and considering that the game files on the CD only take up around 6.7 MB, and with the inclusion of karaoke tracks, you’d think that Sega could’ve done away with them, and popped in some new courses instead of the extra music.
Playing with up to 7 other people was the arcade version’s specialty, and I’ve always loved how the image split across the 8 screens in the attract mode to form one big picture. Unfortunately there’s not even a 2 player mode for this version of the game, and from the looks of the game engine, I doubt it would manage to crack it off anyway.

Graphics: Quite bodgy really, especially for Saturn standards. Cut out the textures, and you’d think it came off the 32X or something. The cars look okay, and have alrightish texturing, but they’re a bit different to the original arcade ones. The backgrounds chunk into view, that if they were any worse, you’d think you were going to drive off the edge of the road into nothingness. Plus there’s bits of stuff missing here and there too. 58%
Animation: I don’t know what to call this. It’s not quite jerk-o-vision, not quite chunk-o-vision, either. Kind of wobbly and strange. It feels like your moving quickly, but the frame rate is clearly not very good. The cloud effect on the car windows is cool. 60%
Sound: Some okay-ish sound effects. Some sound a bit iffy though. The music, although similar, isn’t, for some odd reason, the original arcade stuff, and what can I say, you’ll either love it, or hate it. Personally it’s grown on me, and it just wouldn’t be Daytona USA without it. 69%
Playability: Despite the weird frame rate and bizarre animation, it actually is quite playable, and you should be able to become a pro at getting first place on Normal without too much trouble. 78%
Lastability: I played this over & over & over when I 1st got it. I’ve had it for almost 8 years — (Crikey, has it been that long?) — but I don’t play it any more. This has been surpassed by the much superior Daytona USA 2001. 90%
Overall: It may not have a 2 player mode, and it may look absolutely shoddy these days, but it’s Daytona USA, & you can play it at home. This is a classic. 80%

The song, David Goes To Victory Lane, was composed by David Leytze.