The Dead Or Alive 2 Page 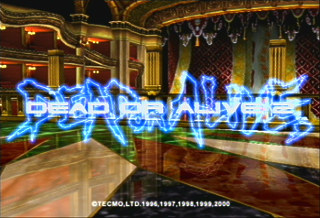 Dead Or Alive 2 is the impressive sequel to Tecmo’s original Model 2 board powered Dead Or Alive. Unlike the original, which was only released in Japan for the Saturn, Dead Or Alive 2 made a much bigger apperance around the world on Dreamcast. Featuring a total of 12 gorgeously detailed characters, 7 playing modes and fantastic multi-tiered stages, this will have you drooling from start to finish. The characters include Bass, a professional wrestler, Helena, who’s fighting in vengeance of her mother’s death, Jann Lee, a passionate fighter, Lei-Fang, a T’ai Chi Quan genius, Ein, who is searching for his past, Ayane, a Kunoichi with murderous intent, Tina, a superstar of women’s wrestling and daughter of Bass, Zack, a funky Thai style boxer, Leon, a mercenary soldier, Gen Fu, the legendary Go-Ken (fatal iron fist), Kasumi, a ninja in captive and Hayabusa, a Super Ninja Aloof.
Play modes inlcude Time Attack, Story Mode, Survival, Team Battle, Tag Battle, Sparring and Versus. In a Tag Battle match, up to 4 players can participate in teams of 2. So long as you have 4 control pads.
The basic controls you have are punch, kick, and free. Pressing all of them, tags your partner if you’re playing a Tag Battle. In this case, it’s an idea to set one button in particular to performing the 3 buttons at once.
There are 2 methods of holds / counter attacks, Arcade & Dreamcast. To counter a high attack in the Dreamcast method, you’d press

F, whereas for the Arcade method, you’d press

F. It’s all explained in the instructions anyhow.
In the Survival Mode, when you knock out your opponent, or execute a follow-up attack on an opponent who is on the ground, an item will appear. Each item is worth a certain amount of points, which adds significantly to your overall score. Items are listed in the table below:

Getting a Danger Reach will also significantly improve your scoring.

Like in reality, if you knock your opponent off a ledge, or through a window, they get hurt when they hit the ground below. In some cases this can knock them out for you also, so it can be worth lining up that extra nasty attack, by using the stage to your advantage.
Once you’ve completed the game with any character and generally without contnuing, you’ll unlock new clothes / costumes for that person. Up to about 6 outfits are available for each fighter.
The intro song, believe it or not, is actually in English, with the chorus being “Use my exciter, Blow up exciter,” apparently. Although when you hear it, it sounds more like “You smart a$$y pyscho, we’re already psycho.”
As an added bonus, there are 5 big (about 1280 × 960 pixels) artwork piccies of the ladies in the game, modelling swimwear, which you can view on your computer. 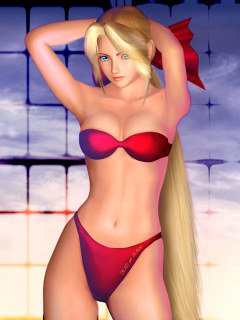 Graphics: Considering the arcade version of the game used an equivalent Dreamcast with simply twice the RAM, the graphics are spot on with the original. Beautiful characters, gorgeous detailed backgrounds and some nice blurring effects for when you smash your opponent into certain walls & the like. Plus it’s crisper and much less jaggy looking than the PS 2 version. 96%
Animation: Whack it in the 60 Hz mode, and it’s smooth as laser cut marble. As for background animation, flapping flags, spinning generators, video screens and zappy sparks add to the overall yumminess. 94%
Sound: Fantastic music, especially during the credits, and good clear speech with grunty thumps and what not. 98%
Playability: This has MAX PLAYABILITY stamped all over it. You’ll be pounding your opponents in no time with fast easy to pull off combos and vicious counter attacks. Not quite as skill requiring as the likes of Virtua Fighter and Soul Cailbur, but still top notch, none the less. 91%
Lastability: With the team battle, tag battle and survival modes, plus the option to have up to 4 real people playing, this should keep you going for yonks. 90%
Overall: A superb achievement from Tecmo. This fighting game belongs in everyone’s Dreamcast collection. 97%

• If you want to get the “interesting” alteration to the intro sequence, enter your name as REALDEMO in Survival Mode to unlock this bonus, with the age setting over 20 in the options. It might need to be 21, although Im not sure now.
• Set your age to 99 for maximum bounciness on the girls nice bits.

• To get the night version of the Aerial Garden stage, press Right Shift to select it.
• Apparently if you use this button combo as Zack: Down, Down + Free + Punch + Kick, in his reflective outfit to do a taunt, the top of his head will light up.