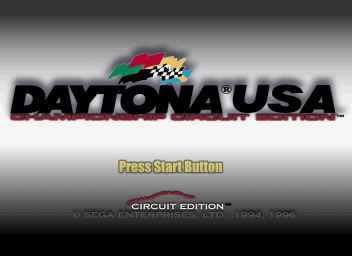 With a new slick frame rate, a further draw distance than even the arcade version, a 2 player mode and 2 new tracks, Daytona USA Championship Circuit Edition was the hot title to prove that the game could be done well on the Saturn.
Featuring a new line up of fast cars, plus 2 of the horses again, and an original “Daytona” car, the mad high speed racing that is Daytona USA had me playing all over again.
The first thing that players of the original game will notice, is that the handling is quite a bit different. That said though, it is still most playable, even though you’ll need to tweak your driving style slightly.
Initially, there are 8 cars to choose from, but once you complete each track in 1st place (on Normal, I think), you’ll unlock a secret car. Keep your eyes peeled for those horses again also!
The 2 new tracks, Desert City & National Park Speedway offer some interesting graphical touches also. National Park Speedway has a fairground area towards the left of the track with a ferris wheel and a rollercoaster, and Desert City has a moving freight train that dissapears into a big rock tunnel, plus a section with a hot air balloon taking off.
At the end of each race you have the option of replaying the race from multiple camera angles, and when you set a lap record, you can review the ghost car as a replay also.
The game also supports Arcade Racer wheel, the Virtua Stick and the newer analogue control pad. Plus you have the option of setting the car handling to Slow, Normal or Quick. 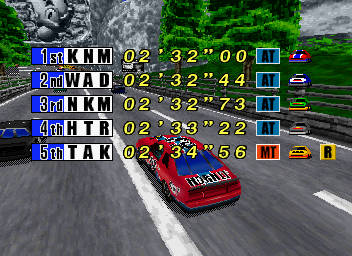 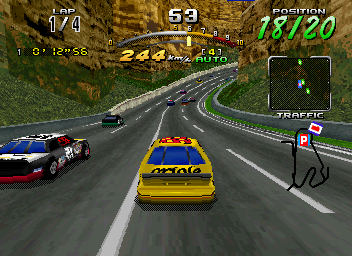 Graphics: An improvement on the original Saturn game, although some of the textures look a bit different. The cars are nicely presented, and retain the moving cloud effect on the glass. The draw distance is much improved, and the shadows of tunnels and bridges, and what not, now affect the cars better than before. Plus the resolution is higher as well. The menus are all displayed in a higher resolution mode, and look of a great quality and are well set out. 86%
Animation: This version of Daytona USA now runs closer to that of the arcade version, but not quite at the full 60 frames per second. Some background animation too — the train going past on the Desert City course, the spinning dice on the 777 Speedway and the rollercoaster in National Park Speedway are all nice touches. 94%
Sound: Remixed music now appears in the game, including that of Pounding Pavement, plus there are 2 new songs for the 2 new tracks, Funk Fair, and The Noisy Roars Of Wilderness plus another bonus track, called Race To The Bass. Clear speech, good car noises an the usual crowd cheering sounds. 90%
Playability: Pretty easy to pick up, but different to the original game. Once you’ve mastered this, completing the tracks in 1st place on the hardest difficulty will be a breeze. 95%
Lastability: I must admit, I don’t play this now that I have Daytona USA 2001, but when I was playing it, it did come out quite often. 91%
Overall: Okay, so there’s this all over again on the Dreamcast now, but not a perfect conversion of all the tracks, considering it’s missing the obvious rollercoaster from National Park Speedway, the people on the bridge in Dinosaur Canyon, and that Sonic is back to front. Still, this version is missing the traffic lights and wires on the Sea Side Galaxy course, that the new version has. Oh dear. Anyway, this is definitely a fine racing game for the Saturn, and is well worth the buy, if somehow you actually manage to find it now. 95%