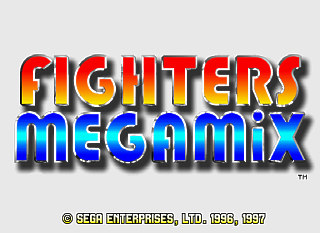 Combining the awesome Virtua Fighter 2 & Fighting Vipers, plus characters from Sonic The Fighters, Daytona USA and Virtua Fighter Kids, Fighters Megamix brings you a fighting experience like never before. With 32 characters, heaps of backgrounds, and some great bonuses, this is the ultimate! What’s more, the V.F. characters have pretty much all their V.F. 3 moves included, plus you’ll also pick up on some of the V.F. 3 music on the CD - the intro music, and also Jeffry’s stage music. One other thing too is that the Outrun music, Last Wave, is included on the name entry screen.
Compared with Virtua Fighter 2, the character resolution is lower, but the game still runs overall in the Saturn’s high resolution mode. AM2 has now included some cool light sourcing on all the characters, and some motion “blurring” effects here and there. When you first start the game, you’ll only have access to Courses, A, B, C & D, and as you progress, finishing each of these, you’ll open up further modes.
With the characters having most if not all of their V.F. 3 moves, and with Janet from Virtua Cop 2 doing Aoi’s moves, I feel that the game is probably actually even better than the likes of Virtua Fighter 3. There’s certainly more characters and stages, plus you also have the advantage of the extra buttons on the Saturn control pad. I have it set up with X, Y & Z as G + P, P + K & K + G respectively, the L Shift button as G + P + K and the R Shift button as Escape.
Not only that, but the game also comes with some cool bonus artwork that you can view, which also appears when you finish the game on each course.
I picked this up for $12 from Cash Converters back in May 2003, minus the instruction manual, which was a steal! Whoever had it before me should be kicking themselves for selling this! The CD’s a bit scratchy looking, but the Saturn has no trouble at all reading it.

Graphics: Good looking characters and backgrounds, plus the high resolution stuff looks great also. The coloured lighting is top stuff, and the background textures look amazing, especially a lot of the grounds, which barely have any pixelation. 90%
Animation: The characters seem to move more slowly than in that of Virtua Fighter 2 or 3, but it’s all very smooth none the less. Some of the backgrounds have extra animation, such as the sunset desert stage with the heat ripples across the sun and the 777 Speedway track with the moving clouds on the big windows in the background. 90%
Sound: Excellent music from Fighting Vipers & Virtua Fighter 2, plus choons from Sonic The Fighters, Daytona USA, V.F. 3 etc. The music for the credits varies per course & it’s great also. Some of the sound effects are a bit bodgy, and the voices are iffy at times, but still, not too shabby. 70%
Playability: Excellent! AM 2 can do no wrong when it comes to the playabilty of games. Well, most of the time. Instantly pickupable, and yet challenging for the masters also! 98%
Lastability: With the huge amount of characters, and with various hidden costumes to snag also, and with a Team Battle mode, playing with ya mates, etc., etc., this will last for absolutely donkeys malonkeys! Sweet. 97%
Overall: An amazing fighting game. I think this won a Golden Joystick award back when it came out, and it’s not hard to see why. The array of fighters, options & bonuses also make this tough to beat. SSM gave this 95% in their review, but I’m going to go one more and give it: 96%