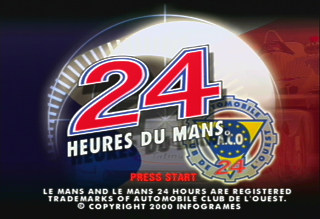 No, it’s not Sega’s own Model 3 board powered Le Mans 24 arcade game — this one’s from Infogrames, and it’s really top stuff. 37 cars, 10 real tracks, 5 game modes and up to 4 players at once — Le Mans 24 Hours Ultimate Endurance Challenge has the lot!
Simply pick a car, a track and choose whether you’re Amateur, Intermediate or Expert, and you’re away!
The 5 modes included in the game are Quick Race, which unlocks new tracks, Championship, which unlocks a few new cars, Le Mans, which unlocks more cars, Time Trial, which gives you even more cars, and Multiplayer, which doesn’t give you anything. No just kidding! Multiplayer lets you play up to 3 real opponents, provided you have up to 4 control pads, and you take each other on in little mini ¼ size bits of the screen. (Big T.V. required here!)
In the Le Mans race you simply must complete more laps in a real period of 24 hours than anyone else in order to win. Naturally, not many people are gonna have the Dreamcast going for 24 hours non-stop while you play this mode, so you can save your progress in the pit lane. If you have it turned on, you’ll also have to watch tyre wear and the fuel gauge.
The cars are divided into 3 categories, LMGTS (Le Mans Grand Touring Sport), LMP (Le Mans Prototype) and LMGTP (Le Mans Grand Touring Prototype).
After selecting your prefered car, you must choose Amateur, Intermediate or Expert. Amateur has automatic corner braking, driving aids and a easy AI car difficulty. Intermediate has no automatic braking and harder AI cars. Expert has no additional help and tough AI cars.
The circuits in the game are Le Mans (France - 13.605 km), Bugatti (Inside the Le Mans track - 4.435 km), Brno (Czech Republic - 5.403 km), Donington National (United Kingdom - 3.1 km), Donington Grand Prix (4.023 km), Catalunya National (Spain - 3.06 km), Catalunya Grand Prix (4.7 km), Suzuka East (Japan - 2.4 km), Suzuka West (3.2 km) and Suzuka Grand Prix (5.8 km). At the start of the game, however, only Le Mans, Suzuka East, Donington National and Catalunya National are available in the Quick Race mode.

The Championship mode is divided up into 8 segments. These are Rookie GT, Pro GT, GT Enduro, Open Prototype, Closed Prototype, Prototype Enduro, Super Enduro and Winter Challenge. Each one is unlocked after a previous one is completed, pretty much.
When you take a pit stop, you have the option of Hard, Soft, Intermediate or Wet Weather tyres. You can also change your downforce to Low, Medium or High. Re-fuelling lets you choose how much to fill up by in 10% increments. A tyre change will cost you 5 seconds, re-fuelling 1 to 5 seconds and a downforce change will take up 5 seconds.
When you’re playing the game, you can use either the digital or analogue d-pad on the Dreamcast control pad, and when you’re driving with automatic transmission, you can use A / Right Shift to accelerate, and B / Left Shift to brake. However, using manual transmission, changes the A & B buttons to gear change. Pressing X allows you to look behind you, and Y changes to one of 4 views. During a replay, you can use Y also to change to multiple views.
Unfortunately, unlike Sega’s Le Mans 24 game (Whatever happened to a Dreamcast release of that, hey?

) your tyres never go white hot, and there are no burning cars scattered around the track to get in your way. Still, it isn’t that game, and is just as magnificent as it is. The 24 hour Le Mans race can get a bit monotonous at times, so it’s really best to just do it over a long period of time, rather than say in 6 hour hits, or so. But, all up, as I said, it really is magnificent.

Graphics: Developers of the game say that they are pumping about 5 000 000 polygons per second on this, something the Dreamcast was never claimed to do! As well as this, there are most impressive effects all round. Lens flares, light streaks, coronas, car shadows, nice reflective effects, cool lighting and some awesome sky effects, especially in the quick Le Mans races. Nice rain effects, and road light reflections, plus good use of fog. Good quality texturing and some highly detailed geometry also. Plus it’s smoother, and much less jaggified than the PS 2 version. 93%
Animation: Smooth as ya like it, even in the 50 Hz mode. No chunk ups either, no matter how many cars you’ve got happening round you. Not much happening in the backgrounds, except some “chasing” lights. 94%
Sound: Beefy engine noises, and high pitch yumminess as the car engines hit 11 000 rpm. Plus crowd noises add a little welcome ambience here and there. The music is rather poor though. 90%
Playability: Big points here, ’cos this plays excellently. Infogrames got it down pat with this. 97%
Lastability: It doesn’t draw me in as much as other games, but once you’ve cracked it out, and especially with some mates, you’ll be in action. Plus with the real-time 24 hour race, Championship mode and Time Trials, it should keep you playing for yonks. 89%
Overall: Oh, how I wish you could pick up any racing game, and it’d be as good as this. But they’re not. Truly a good buy. 90%