The NiGHTS into dreams… Review Page 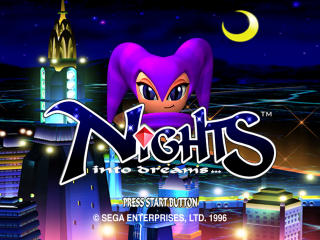 Story Rundown:
In the town of Twin Seeds, live Claris & Elliot…
“In their dreams Elliot and Claris have seen NiGHTS, a being capable of flying freely through the sky and performing the trickiest of aerial acrobatics. But what is NiGHTS? A spirit? A memory? Whatever he, she, or it is, NiGHTS plays an important part in the upcoming battle with the evil Wizeman.”
Nightopia, the land of our dreams is under threat by the ever growing power of Wizeman The Wicked. His henchmen, the Nightmaren, are stealing dream energy from us, and if hes not stopped, he will break from the dream world into reality, and no one will be able to stop him.
Begging for help, a Nightopian escapes from the world of dreams and asks Elliot and Claris for their help, in order to defeat Wizeman. The Nightopian informs Elliot and Claris of 4 types of dream energy that need to be taken back from Wizemans Ideya Capture. The energies are White (purity), Green (wisdom), Yellow (hope), and Blue (intelligence). There is a 5th dream energy coloured red, that Wizeman is unable to steal, which is bravery. Fortunately, NiGHTS is about the only one left, not under the control of Wizeman. He / she is also attracted to red dream energy — something Claris & Elliot both possess.
Originally NiGHTS was supposed to be a Nightmaren, who had defied Wizeman, and was hence trapped inside his / her little palace, only to be freed by the red bravery Ideya of Claris and Elliot. But in the Eurpoean version theres no mention of it in the instruction manual or the game. NiGHTS seems to be more of a mysterious fellow. In any case, he / shes now on the good side, and gives Claris and Elliot a hand once more in Christmas NiGHTS to find the missing star of the Twin Seeds Tower Christmas Tree.

NiGHTS is a completely new genre of gaming. It combines elements of racing and platform games, yet neither can be used to fully describe it. The object of the game is to collect 20 blue chips and deposit them into the Ideya Capture. This then overloads it and it collapses. The game then goes into bonus time, and here, with your collected Ideya, you rack up twice the value of everything. So if youre looking for a top score, grab the 20 blue chips, deposit them into the Ideya Capture, and then go around the level again! This is now the best time for killing the Nightmarens, plus collecting other items. Items youll come across are Colour Chips (originally blue, then gold in bonus time), Star Chips, Rings and Power Loops. Both types of chips are worth 10 points, as are Rings. Rings will also boost your Drill Attack Gauge. Another item is the Power Loop. This pops a yellow streamer out of NiGHTS, and allows you to perform stunts for extra points. You simply need to use the L & R Shift buttons with NiGHTS at various flying angles to perform certain stunts.

Taking out enemies is most effective by Paralooping them, or by grabbing them and then spinning into a Paraloop. You can Drill Attack them, but this sends the enemy off into Nightopia as a ball and if it hits a Nightopian, it may mutate into a Mepian, which is a half good, half evil creature that takes on the look of the baddie you sent whizzing off.
After youve collected all the Ideyas and returned to the Ideya Palace with the last one, you will be teleported off to a Nightmare stage after getting an A - F rating on your performance of the 4 courses that make up each Nightopia level. Here in Nightmare you must face one of 6 different bosses. These are either Reala, Gulpo, Clawz, Jackle, Puffy or Gillwing. In the final Twin Seeds level, you must take on Wizeman himself. 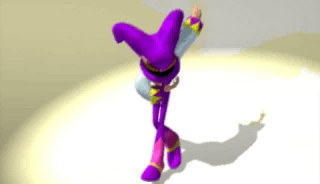 NiGHTS plays like a dream (no pun intended, mind you) and is an absolutely awesome experience every time you play. The style of NiGHTS, with rapid loops required, calls for the custom NiGHTS 3D control pad. With an analogue d-pad, controlling NiGHTS is far, far easier and a lot more enjoyable than the standard Saturn pad. Plus you can use the extra features of this pad for other games too.
Once youve completed the game, the idea then is to go back and score as many points as you can on each level. Gaining an A rating on every level alters the ending and shows how much of a pro you are.
Overall, yknow, this was, and probably still is, the most must-have game for the Saturn. A Sonic Team classic.

Graphics:This game really shows what the Saturn can get up to. From coloured lighting to spectacular transparent effects, reflections, warping terrain and mist, NiGHTS manages to squeeze in numerous eye-candy effects. The boss stages especially look out of this world, with big, brightly coloured textures and flashy effects. Some of the Saturns finest stuff. 96%
Sound: Wonderfully composed music that changes to suit the mood of the Nightopians in each level. Some of it was played by a symphony orchestra, I think. Other than that, top range sound effects, and plenty of them also! 96%
Animation: Very smooth all round. Plus if youve whacked a 60Hz switch in ya Saturn, you can speed it up even faster. Gets a bit chunky when theres lots of Nightopians / Mepians around. 94%
Playability: Unbelievable. NiGHTS is simply oozing & dripping with playability. Great controls and really fun. 98%
Lastability: If youre constantly out to improve those scores, then youll always be back for more. 95%
Overall: A truly magnificent piece of gaming. NiGHTS is one of the few rare gems that you should have on your shelf. I picked this up with the control pad for under $70 back in 1997. Youll be hard pressed finding it now though, but if youre desperate, you should consider hunting it down from places on the Internet. 98%

• If you have Christmas NiGHTS as well, keep the save files together, either both in your internal memory, or both on a cartridge, and that way, when youre in Christmas NiGHTS, you can view your A-Life status for each level, and play with all the music combinations in the Melody Box from both games. Sweet.
• Play Christmas NiGHTS on April Fools Day to have a go as Reala.
• Use these dates and times in Christmas NiGHTS for various effects:
Dates:
25th of December: Christmas NiGHTS
29th of December 1997: Spring Valley Winter (not sure if the year is important)
31st of December 2099: Purple snow (apparently)
1st of January: New Years NiGHTS
March to October: Original Spring Valley
Times:
9:00 - Crescent moons
12:00 - Purple confetti
15:00 - Candy
18:00 - Stars
20:00 - Nothing falling
21:00 - Stars
0:00 - Hearts

According to the Nights Intro Dreams website, the N.H.C. in Gloom Of The N.H.C. stands for National Highway Corporation.