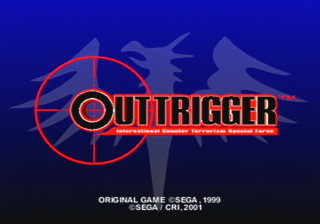 From the arcade into your house, AM 2’s Outtrigger (— that’s Out-trigger, not Out-rigger, by the way—) brings you non-stop F.P.S. style action right from start to finish. Even though you’ve probably never heard of this game all that much, it’s actually been round since 1999. Outtrigger only appeared in Japanese arcades, as the first multiplayer arcade F.P.S. type game. Luckily, this hot game made it to more than just Japanese Dreamcast consoles. You play as a member of an elite unit known as the International Counter-terrorism Special Force, and the game sees you rescuing hostages, taking out bombs, and wiping out nasty terrorists.
Game modes include the original Arcade Mode, VS Mode and Mission Mode. Arcade Mode is a one player deal which allows you to take part in 4 training courses. These are named Preparatory, Novice, Intermediate and Advanced. VS Mode allows up to 4 players to take part in battles where it’s everyone for themselves, or with players in teams. If you simply choose to take part in a one player mode, you’ll get a full screen display of the action, as opposed to the split screen with ya mates. Game types can be Time Limit or Point Limit, and you can also select how many points are required to win and a time limit.
Mission Mode is one player only. It’s a bunch of missions that are divided up into 3 difficulties. Each of which has 15 sub missions. At the start, there are only 5 available, and you’ll unlock the rest as you progress. The 15th level can only be unlocked when the previous 14 are completed successfully.
During the intial set up stages, you can customise your character with various weapons, colour identification and the like. As you play, new characters will become available.
Playing Outtrigger can be a pain if you just have a control pad, so luckily there’s an option for the keyboard and mouse. Of course, if you expect to save the game, you’ll need to have a control pad plugged into controller port 3 or 4 on the Dreamcast with a VMS. If you’re stuck for a good configuration, you may want to try it how I have it. The left mouse button shoots, the side button changes weapons, the right button jumps, and the 4, 6, 2 & 8 buttons on the number pad control your direction. It’s something similar to how I have it for Quake 3 Arena & Unreal Tournament on the PC.
To pause the game, you simply use the Pause button on the keyboard, something I was pleasantly surprised to see AM 2 using, and resetting the game uses the all too familiar Windows resetting method with Ctrl + Alt + Del.

All in all, the gameplay is quite easy to get to grips with, and even the Intermediate and Advanced difficulties in Arcade mode are quite easy to get through. The Mission Mode, however does pose some tougher challenges.
Aiming your weapon is quite easy also. You simply line up your target with the enemy, and shoot! Pretty much like most F.P.S. games. There are several handy items which are included to help you on your way, and these include Thermography, Noctovision, Armor and a Power Up. Thermography allows you to see your enemy’s position through all objects. Noctovision basically turns night into day. Armor is pretty self explaining and the Power Up increases your speed, aim and attack power for a short time. Graphically there are some nice effects, such as the cool reflective ice on the White Base stage and some good looking levels, but that said they aren’t very big, so don’t expect anything on the scale of the likes of the original Unreal. That is, if you’ve ever played it. Still it keeps the combat close, so you won’t spend ages trying to find your opponents.

Graphics: Pretty spiffy all round really. There’s some nice reflections, good geometry and reasonably good looking textures. 90%
Sound: Mood setting music and great weapon sounds. Your usual stuff. 87%
Animation: Smooth, smooth, smooth. Even on the 50Hz mode, it’s pretty smooth, too. Good character animation also. 98%
Playability: This is so playable it’s not funny. Easier than Quake 3 Arena, and pretty much on par with Unreal Tournament, I reckon. Of course, the smooth frame rate helps as well. Definitely worth having a mouse and keyboard for, but that said you should consider other games that support these 2 peripherals as well, to make the purchase worth while. 97%
Lastability: There’s lots to do in the Mission Mode, and good if you can round up some buddies also. This should have you playing for a while. So long as you can be bothered to keep plugging your keyboard and mouse in. 67%
Overall: It’s from AM 2, so what do you expect? As usual great game play and a good overall look to the game. The story line for these type of games can be a bit lame sometimes, and though it lacks a really long definition, the anti-terrorism thing manages to cover it. For those of you extra gaming pros who’ve been to Japan, and happened to play it there, I can’t comment on how the control pad or the keyboard and mouse vary from the freaky joystick and “eye” thingy, but it feels great to me! 84%