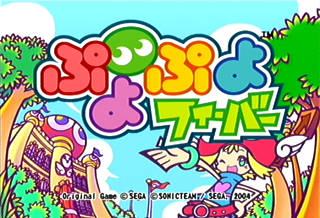 Compile’s Puyo Puyo series has been going for donkeys years, way back into the golden era of gaming. Stuff was actually challenging then, and it makes some of today’s games look about as hard as tying your shoe laces. The first game was originally a RPG on the MSX, and the following series has appeared on various Sega consoles in the past, such as the Game Gear, Mega Drive & the Saturn, as well as many other brand systems also, even including mobile telephones!
These Puyo Puyo titles weren’t released much / at all outside of Japan, but did have some “resemblances” in other games with different titles. Doctor Robotnik’s Mean Bean Machine was one of the games that came under a different title, but was basically the same thing. So I’m not exactly sure how far Sega’s involvement with the titles actually goes in, but if Sonic Team have done this current version, there would seem to be a close relationship. (You hard core fans of the series better correct me!)
As of the 2nd of March, (when the game arrived,) Ive been going off, getting my combo skills more down pat, and making new high scores! Sweet! 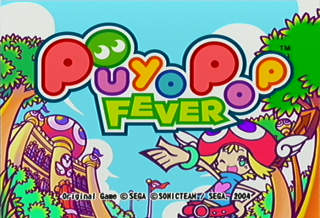 Puyo Puyo Fever is also the 1st Dreamcast game to take advantage of a feature of the console that nobody knew about, except for within Sega. A save file on a VMS causes the Dreamcast to show a new background image in the “BIOS screen” area. No doubt this will be used more often now that it’s known about. All you need is the file on the VMS, as the Dreamcast always checks to see if it exists.
Initially, due to my poor Japanese reading skills, I was only aware of Japanese in the game, and I was surprised to find out that the English version is all on the GD as well. I can barely read a word of the Japanese, & I think I only understood about 4 things that were said, but never the less, its all very cool! If anyone needs to know how to change it to English, just send me a message — ICQ or e-mail, and I’ll let you know. I’ve put up screen shots of the option screen too of the bit to change. To change the Dreamcast background deal, you require 38 blocks of space on your VMS, and you can choose from various Puyo Puyo Fever images. I also managed to change the VMS icon before I found the English stuff, and then I deleted it again by mistake. Oops. At least it cleared off that Capcom thing I had stuck on there. It went back to the original icon I chose. So if you have an icon you can't get rid of, and want to get back to the original one you chose, Puyo Puyo Fever can sort it out. ;-)
I first got into the action playing Puyo Pop Fever at PlayTime in Sydney and it was evident that this game was really something cool.
Okay, research time! If you wanna find out about all the various Puyo Puyo games, check out this website I found, which has lots of info: The Puyo Puyo Museum.

In Puyo Puyo Fever, you kind of play as this chick named Amitie who has a funny big hat thing that looks like a puyo, and shes learning magic at school. Accord, her teacher has “lost” her magic cane, and Amitie is helping to find it. The idea of the game is that you have these coloured puyos that drop down the screen, and you need to line the colours of them up to clear them off, 4 or more at a time. Getting multiple colours to clear off results in combos, and if you go into the Fever mode, you can go seriously off, and drop lots of nasty nuisance puyos on your opponent, making them almost helpless in their fight to try and get matching colours happening. When your opponent runs out of room in the 2 middle columns to cram any more on the screen, you win.
Fever mode builds up on your gauge near the centre of the screen, as you offset nuisance puyos from your opponent, before they fall on you. Offset enough, and you go into Fever mode, where chains are already set up to go. You just need the right colour to set them off! Then make your opponent pay! Offsetting a rock puyo may not be hard, but crown, star and moon puyos are deadly! If you get an All Clear, outside of Fever mode, a bunch of puyos will fall down, ready set up for a chain reaction as well.
I like how the game also displays where your puyos are going to land in the Run Run Course, and how they flash where you’re about to clear a bunch off. Using the buttons (A & B on the DC), you can rotate your puyos, and pressing down on the joystick (d-pad for the Dreamcast) makes them speed up to the bottom. When they touch up against another bunch, they squish about like jelly, then explode when they clear off.
You can save replays too, if you did something impressive, but you need a bit of room on your VMS.
My copy came from National Console Support, and their address appears to be in New York. It didn’t take very long to get here, either.
Sonic Team haven’t included any bonus wallpaper images on the GD this time, like I hoped. Previous games like NiGHTS, Christmas NiGHTS, Burning Rangers, Sonic Adventure 1 & 2 — all had bonus stuff. Mmm, I like bonus goodies does me! But, oh well. Check out the bonus picture over there of Amitie that I drew around. I made her say “Hi there!” also, cos I figured she’s pretty friendly.
If you want a copy of the game yourself, and if you’re not sure where to buy it from, you should check out places like National Console Support, Lik-Sang, Play Asia and so forth. Let’s all get the Dreamcast version to prove to all those bitter sods that it isn’t dead at all! You might want to look around for Puyo Puyo 4 also, which was released around the 29th of February 1999, I believe. If you look around various sites that offer imported games, you shouldn’t find it too hard to come across.

A big thank you to Sonic Team also for the Dreamcast version, in a time where it’s software line up isn’t as strong as it used to be, and also for including the English too, despite it being a Japanese game release.
Now I can’t tell you all the Japanese text, but I can make out some of it. When you complete a course, or get a new high score, you will be prompted to save the game. Basically a dialogue box deal with Hai, (Yes) or Iie (No) on it. After this comes up, you will see another one that appears to ask if you want to replace the current file. If so, you need to select Hai for both, which should be on the left of each one. Finding the options is pretty easy also, because the Japanese is spelt kinda the same as the English equivalent for the word option. It’s displayed as: Opushon. Of course, you’ll need to be able to read the Japanese characters! Once you’ve managed that, it makes it rather easier to find out what the words mean. Does anyone know what Machigai Sagashi means? It seems to be printed down the side of the inside cover of the box, and mentions the 31st of May 2004. A soundtrack release date perhaps? Hmm, not sure on what that means. So it looks like it’s back to my dictionary to try and make some stuff out. 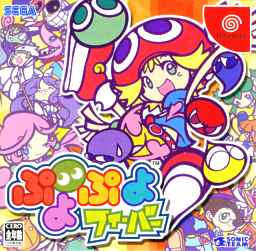 Hee, hee - I like the intro music, and how Amitie goes: Puyo Puyo Feeeeevaaaaaaaaa! in her high pitched voice. Other characters also say it as the attract mode runs. As in most Puyo Puyo games, when you come up to taking on a new character, a little story part takes place, and as the character’s expression or emotion changes, they kind of flip over to a new image, and sometimes have other effects taking place around them too.
The instruction manual is brilliant also, with full colour pages right throughout the whole thing, as seems to be done with a lot of Japanese games, I think.
When you play the game in the original Japanese language, the title will be displayed as the regular Puyo Puyo Fever, and will have “pu” written on the sign posts in the backgrounds. Change it to English however, and it becomes Puyo Pop Fever, with a “P” on the signs.
Mmm, now of course, most of us Aussies will have a European Dreamcast system, and PAL T.V.s also, which ordinarily would mean that if you were going to be playing this game, you’d need to ensure that your tele could accept a NTSC signal from the Dreamcast while running this title. Fortunately, it comes out in PAL 50 Hz, because the software probably presumes that it’s running on a Japanese system, and doesn’t need to change anything, so you just get your Dreamcast’s default setting. Naturally, you’ll need something to actually run Japanese games. You can find out about that on many different sites on the net for whatever option suits you best. (Such as the *cough cough* Utopia Boot Disc.)

Graphics: Vibrant, funky cartoon like graphics, excellently drawn characters and backgrounds, plus spiffy special effects! 90%
Animation: Smooth all round, just how I like it! The wobbly Puyos look great when they smoosh together, and then explode. Very fluid-ish. 98%
Sound: Great music that will get stuck in your head. Nice sound effects, and clear speech also. Having the English voices is great too, especially if you’re not fluent in Japanese. :-P 98%
Playability: Easy to get into on the Run Run Course and things start warming up a bit on the Waku Waku Course. The last 2 modes are pretty tricky by my standards, and you’ll need to think fast, and have your brain turned on, and have a cup of coffee going. 90%
Lastability: Beating your own score is the name of the game, if you manage to get pro and finish this. Plus the 2 player mode is great, and you can set up different playing rules too. This should sort out between ya mates who’s got the puzzle brains of the bunch! 88%
Overall: An excellent puzzle game whether you’re playing with yourself or with someone else also. Loads of options to tweak, and various modes to try out also. Whack in your vibration doodad also for some extra shaking during gameplay. Bzzzz. 93%