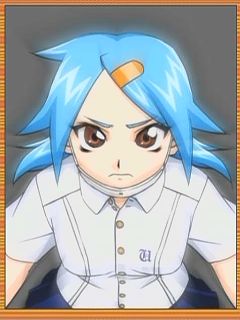 This is pretty much the Dreamcasts 1st game for 2006, an excellent shooter from the relatively new company, Milestone, whose members consist of ex-employees of Compile, the same company resonsible for the Puyo Puyo series of games. Considering its mostly all in Japanese, that means I can pretty much read none of the text in the game. But thats okay, cos I know a bit of the story line, and Im going to attempt to explain what some of the pickups do also, as well as mention some other things Ive learnt in the last 2 weeks or so.
Well, it seems that a nasty organisation (not run by me is it?) are trying to distrupt the communication of mobile phones which in this games setting, are built into buildings, and even implanted in people too. What you have to do is fight them off, and destroy the uh, “radio allergy” (???) thats affecting lotsa people. Or something like that. Anyway, on with what I do know…
First, lets talk about the options, cos luckily for me, theyre in English, which is handy, Andy. On the “Config” screen, you can choose the difficulty, how much battery power you have, the extend mode (which Ive yet to figure out), the screen mode, (TATE, or YOKO, which means vertically or horizontally,) whether or not you want vibration, the controller button setting, and the auto save option. If youre in the fortunate position of being able to rotate your T.V. 90° anti-clockwise, you can make use of the TATE mode, so you get a full screen display, instead of with borders on the sides. My 68 cm TV weighs 45 kg, so its not exactly possible in my case. (Maybe if I could lie down and look at it sideways?)
Anyhoo, when you go to start the game, you have a few options - pushing the d-pad up and down will let you select between 3 different types of shots that you can make - those green coloured “bullety” things, bubbles, or the 123 LASER whatsit. Pushing left and right will select what speed “ship” doodad you want to fly, and the “X” button will choose whether or not you want the e-mail dealies coming up, which explain stuff.
Once youre under way, you use the “A” button to shoot, the “B” button to use your sword, and “X” to activate your shield, when the ABS gauge is fully charged. By hovering over enemies, especially the easier large ships that dont shoot anything at you, you can suck them dry for some more signal strength, 2 ×, 4 ×, 8 × & 16 × if you stay there long enough. This can be built up pretty high until you use your shield again, I fink. Youll see a wad of green & yellow pills zooming up to the gauge at the top, which indicates the signal level. Score multipliers appear in the positions of destroyed enemies also regarding how many times youve cranked things up, signal wise. Using your shield over enemies, and allowing enemy shots to hit it will also increase the signal strength gauge. Your shield of course momentarily protects you, and will suck in nearby pickups too, which is great stuff for extra points. Each time you destroy an enemy, youll see some blue and white coloured pills zip down to your ABS gauge. Diamond shaped purple pickups will crank it up to the max. (See below.) Using your sword on enemies will suck out the blue and white pills even more, so make use of it on those big chunky ships especially! This is particularly important in later stages of the game, when you pretty much need constant shieldage. Hitting pickups with your sword will push them back up the screen again, but do it enough and theyll change into something even better! So if your ABS gauge is way down, and you really need some shield action, try hitting the regular occurring blue triangular booster pickups, and you may just get them to turn into a diamond shaped purple one. Youll also spot orange ones that give you a shield that stays while youre shooting.

Not doing anything at all produces a small shield at the front of your ship thing, which if used correctly can absorb enemy fire and turn it into the yellow & green pills that increase the signal strength. This can come in handy when youre under heavy attack, but you need to remember that it doesnt protect the back of the ship, so if you fly down, you need to ensure the coast is clear. Enemy shots in this shape:

and other rough looking ones, can be destroyed, but the rest of the more rounded ones:

pretty much cant. As the game progresses, these will get a lot larger also. While using your shield though, you are invincible to the bigger enemy shots and they will be absorbed along with other things nearby.
Heres some of the pickups that I know, plus ones Ive yet to work out:

Other little pickup icons include stuff like ice blocks, mushrooms, drinks, fruit and even USB flash memory units. These all have a dark blue background, and I think they just give you extra points.
The game starts out quite easily, and lets you get into how things are done. As you get further into it, things get quite a bit harder, with more enemy shots getting in your way, and harder bosses too, of course. You really should watch the tutorial the 1st few times too, because even if you cant read Japanese, you can still pickup a few pointers by watching whats happening. If youre going for a high score, concentrate on getting those green & yellow pills to boost your signal strength, and try to get as far as you can on 1 credit. Once you continue, your score will reset.
If you like this kind of game youll find it quite addictive, and theres plenty of action here to keep you a happy chappy.

Naturally, if youre importing this game to Australia, then youll need a way to get it to run on your PAL Dreamcast (unless of course you have a Japanese one already). If youve got a mod dealie in your console, then you should be set, but a trusty boot disc will do the trick also, such as the controversial Utopia Boot Disc. Note that the game will run in the PAL 50 Hz mode if you use this, and not NTSC, probably because Radirgy presumes theres no need to tell the Dreamcast to change anything from its default setting. A region switch is just as good too!

Graphics: Just like Jet Set Radio and Sonic Shuffle, Radirgy is all cel shaded, which gives it a distinct cartoon kind of look. The trees look quite good, and a lot of the buildings too, plus the bosses generally command a large area of space to wreak their havoc. All the bullets and shots, pickups and so forth are 2D, but the rest of it is mostly 3D. At times the screen is jam packed with nasty stuff, so theres quite a bit of detail. Its all clear and crisp looking, with some nice artwork that pops up on the loading screen for a split second. The explosions stick typically with the cel shading style too. 86%
Animation: Pretty smooth all round, with some minor slow down when things get a bit dense. Enemy shots all rotate, and your own “ship” has some pretty fluid movement as well. 92%
Sound: Funky sorta music that will get stuck in your head. Some beefy explosion sounds, and interesting shooting noises also, plus bleeps and bloops and all that stuff. 90%
Playability: Its very easy to use the controls, and if you prefer you can even use a joystick. Very responsive also. 91%
Lastability: Increasing your score in this kind of game is something that will always draw you back, and getting further each time is a good goal to keep working on, unless youre like really pro and can finish it quite easily. 95%
Overall: Now seems to be the time of Dreamcast shoot em up style games, with Under Defeat, Chaos Field, Border Down, Baldr Force EXE, Psyvariar 2, Ikaruga, Shikigami no Shiro 2, Trizeal and so forth. If this is your fave genre, then you cant afford to miss this great game. The graphics are funky, the music is great, and theres loads of playability to be found here. 87%