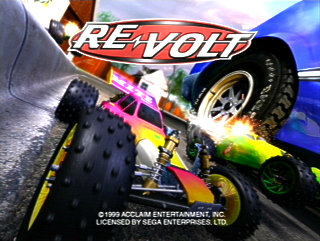 I originally played a demo of Re-Volt on the PC, quite some time before it was released for the Dreamcast. The conversion, of course, was spot on, still including the very easy to use track editor, which only uses 14 blocks per track. (7 for the editor save, and 7 for the exported version.)
Now, I’m not going to say that this is a replacement for the real deal of remote control car racing, because it’s not. Especially with the various weapons and what not, that are included. Let’s get onto those. In your line up, you have a single rocket, with a bit of grunt, 3 lesser rockets that you can fire off individually, The Shockwave, a scenery warping ball of some kinda energy that flips your car over, an electric field that zaps nearby cars, a booster battery, a big ball bearing, oil spills and of course that nasty one that blows your own car up. I’ll list what it’s called sometime soon. This one you can pass onto another car, before your antenna burns down, saving you from an explosion of nasty proportions. Another handy pickup is the bogus pickup, that other cars explode on, if you travel over it. A must have for multiplayer games.
When it comes to multiplayer games, you can choose up to 4 players, so long as you have 4 control pads, that is.


Graphics: Cool looking cars and other vehicles, and fancy tracks with spiffy effects, like real reflections, fancy glows, and nice texturing. Check out The Shockwave, how it warps up everything. 95%
Animation: Very cool animation. The antenna jiggling about on the cars is cool, and so is the blurring it makes. No 60Hz mode, but still, nice & smooth none-the-less. 90%
Sound: Funky music, nice remote control car noises, tyre screeches and special effect sounds. 86%
Playability: The majority of cars handle well, and there’s a good challenge involved too. 76%
Lastability: Pretty good. I didn’t find the Championship mode overly interesting, though. Extended with the ability to do your own track designs. Buy a new VMS for this. 72%
Overall: A cool racing game that takes it to the small scale for a new approach. Good stuff. 79%

When on the name selection wheel, enter CARTOON for all the cars, and TRACTION for all the tracks. These won’t be saved permanently, so you’ll have to unlock them in the Championship mode.