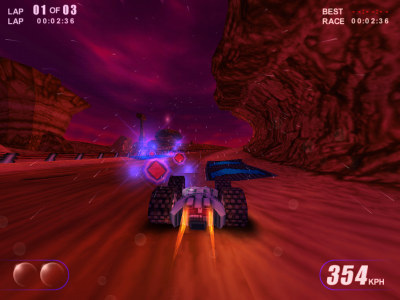 (At the time I reviewed this, I was using a 3Dfx Banshee, not the GeForce 2 mentioned previously. But it also works fine with my new nVidia GeForce 7600 GT on Windows XP, apart from some gaps in the polygons. You’ll need to be using a 32 bit version of Windows XP also, because the installer is 16 bit, and 64 bit versions of Windows have no support for 16 bit Windows programs.)
Rollcage is one of the most awesome racing games of all time! You hoon around in futuristic cars that can flip up-side-down, and keep going, and at speeds over 500 km per hour! Grabbing power-ups along the way can do all sorts of cool stuff like giving you rockets to fire, shields, boosters, lighting, warpy things that pop you ahead and a homing missile that targets the first car. I use the Creative Cobra Gamepad to play this, ’cos it’s got more buttons than a shirt factory, and basically the keyboard is just horrid to play racing games on.
At the starting line, it’s a good idea to tap the accelerator and as soon as the “1” dissapears, you just whack that old button down, and your car zips up past everyone else with a massive jolt. Driving through tunnels is cool, ’cos you can drive your car up onto the roof for boosters and pickups and the like!
There’s heaps of tracks to choose from, and some have to be unlocked as well, and of course, there’s plenty of cars to choose between too, giving you the right mix of spec’s for your driving style.
You can play with up to 4 players on the one PC (Crikey!) or 6 people on a network (That’s more like it!).
The game has a bit of an intro showing you how seriously these dudes & dudesses take their racing, but once you’ve watched it a few times, you’ll probably just skip it. You’ll need a 4MB Direct 3D or 3Dfx compatible video card to get this looking yummy, and probably a computer not too much slower than mine to get it running smooth in every instance. You need 16MB of system RAM, minimum and 10MB of hard drive space minimum. But 130MB is recommended. It runs in lots of cool resolutions, and if you have a grunty video card like a GeForce 2 or something, you can crank it up to some very yummy modes. I have it going great in 1024 × 768 pixels.
(With the GeForce 2 video card, I’ve now cranked this up to 1600 × 1200 pixels [with no anti-aliasing] with no slowdown.)

Graphics: Great special effects all over the shop. Heaps & heaps of transparencies, lovely coloured lighting, sensational weather effects and even a nice reflective bit in there too. Geometrically it’s a bit simple by today’s standards, but besides that, it’s pretty fantastic. 90%
Animation: You’ll need a pretty decent computer to get this nice and smooth. Meteors, flying ships, fire and crashing buildings make up for some nice “goings on” in the background. 87%
Sound: There doesn’t appear to be any music as you drive, but the sound effects are all pretty decent. 76%
Playability: Rollcage plays excellently. It’s certainly a lot easier than the tracks in Rollcage Stage 2. It’s simply a matter of finding the car that suits you, and you’re off, like a rotten banana! 97%
Lastability: There’s several tracks and that to unlock and other secrets also, that I won’t mention. I don’t play this as much as I’d like, and I tend to feel this is better as a multi-player game than just on your own. 84%
Overall: If you can actually find this game, it’s worth getting. I’ve been looking for it for years, and I found it recently for $14.95 at Revolution CD in Pitt Street in Sydney. Definitely worth looking at if you like racing games. 95%

With a XBOX 360 controller, here’s some decent button settings:
A: Brake
B: Target
X: Fire 1
Y: Fire 2
Start: Pause
Back: Zoom out
Up: Face forward
Left Top Shift: Look back
Set it up for digital use in the game and use the digital d-pad and Left & Right bottom shift buttons for accelerate and brake.