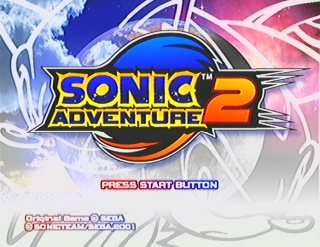 Sonic Adventure 2 sends Sonic back after the notorious Dr. Robotnik once again, only this time you have the option to play the Dark Side! Sonic R was about the only other Sonic game that let you play as Robotnik and his meanies, but now you get the chance to do it all again!
The gameplay is faster and smoother than the original Sonic Adventure, and it now introduces 2 new characters, Rouge The Bat and Shadow The Hedgehog, the ultimate life form, a nasty black coloured dude that hates Sonic.
Shadow plays pretty much like Sonic, only though he has rocket shoes. Rouge is white and is like Knuckles — she can climb and glide as well as digging.
Tails now walks around in a modified version of his Tornado 2, the speedy sequel of the original that appeared in Sonic 2. Dr. Robotnik also has a walking machine, and both are equipped with a lock on gun that can blast away mulitple enemies. Take out 10 at once for a “Perfect” rating!
Unlike Sonic Adventure 1, where you chose a character and played through the game with them, in this version, you play as all characters on the Hero / Dark Side, one after the other until the end of the game, or until you run out of lives. You can select a level to play on from the map with any character, and also visit the Chao Garden from there.
The Chao garden now allows you to take your cute little Chaos to school, where they can learn various lessons, and even go and see the doctor! You can visit the Prinicipal as well.
Sonic starts the game, of course, and has you hurtling down the streets of San Francisco on a type of snow-board thing. Hit the “A” button on jumps to get high up items and collect rings. Once you get to the cable car, Sonic loses the board and makes a run for it with his Soap Shoes (— the original grinding skate shoe). These nifty shoes allow Sonic to grind down rails and the like at great amounts of speed and allow him to get through areas completely impossible to pass otherwise.

You’ll notice some great looking stages in this game, as you can see from above, and they now benefit from better camera work, although you will have a great bit of difficulty going back where you came from, as the camera always wants you to face the right way! D’oh!
By the time you reach the end of the game, you’ll be a Sonic Adventure master pretty much, ’cos the last levels get tough! But, just like Sonic Adventure 1, you’ll find many items for the characters along the way. These include Light Shoes for Sonic to perform the Light Dash across rings, the Shovel Claw for Knuckles to dig into walls and the ground and the Mystic Melody, which allows for many cool things to happen. But I won’t say what they are.
Killing baddies now also pops out little glowing “Chao Drives” as well as the small animals. These help you in raising your Chaos, and also recover a little bit of health for Dr. Robotnik and Tails. If you find all the animals in the stage, you’ll get an extra life! Bonus!
Other bonuses come in the form of Technique Points. Do tricks or get numerous baddies at once and you’ll get extra points for that.
Point Markers, (which were once star-posts,) now give you extra items if you have certain amounts of rings. Look out for shields, extra rings and speed shoes.
When you reach the end of each level, you’ll see a big goal / back ring. Run, or jump into this to complete the level / go back (, if you’re looking for 100 rings for instance). 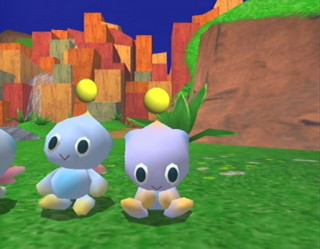 Sonic Adventure 2 also has a Kart mini game. (Uh, oh, it’s not a Mario rip off is it?) Collect 20 rings here for a boost, or get it from a balloon.
If you don’t know how to play Sonic Adventure, Omochao (, a mechanical Chao,) will explain it for you in the Tutorial section! He also pops up in the game while you’re playing, to explain certain things. You can even pick him up and chuck him at enemies. Very handy!
Unlike the 1st Sonic Adventure, where you chose a character and played through their part of the game, Sonic Adventure 2 sees you playing straight through on either the Dark Side or Hero Side with all characters. However, you can come back later and choose specific stages from the Stage Select “map,” as well as visiting the Chao garden with characters who have found the key to get there in their levels.
All in all Sonic Adventure is one excellent sequel, with some nice added extras and what not. Definitely a good buy.

Graphics: This is top quality Sonic Team stuff here, showing once again that the Dreamcast is beyond amazing. Excellent textures, gloriously detailed stages, and improved characters over the original Sonic Adventure. Fantastic effects also - particles, yummy looking water, light streaks and so forth. 97%
Animation: Smoother than ever before. Sonic Adventure 2 keeps at 60 frames per second the whole way. 98%
Sound: Superbly clear as you’d expect. Once again, great music that pumps out of your speakers, and stuff that sets the scene well. 97%
Playability: Totally Sonicy and faster and more action packed than before. Great controls and the smooth frame rate makes this outstanding. Does suffer still from a bit of “wonky-camera-syndrome.” 95%
Lastability: With 5 different tasks for every level, and ratings for these to improve, you’ll be coming back for months to perfect this. Unless you’re like some super pro that got all “A” ratings straight up! 96%
Overall: Sonic Team have done it again. This is one of those must-have games. 97%

Collect all 180 emblems to unlock Green Hill Zone! The easy way, of course, if you’re desperate to see it, is to download a save game onto your VMS.