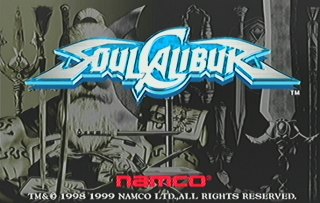 Right from the arcade into your house, comes Soul Calibur, Namco’s deliciously yummy fighting game, based in the 16th century.
After playing the horrid PlayStation & arcade versions of Tekken & it’s sequels, I was surprised to see that Namco had produced something amazingly different. After playing the arcade & Japanese Dreamcast versions, I was more than happy to snap up the official release out here in Oz.
The fighters all seem to want to get their hands on Soul Edge, a demonic blade with evil powers. It has different meaning to each of those who seek it.
Soul Calibur features a truckload of fighters to play with, and even more stages. Plus, there’s hundreds of moves as well. The characters are: Hwang Sung Kyung, Yoshimitsu, Lizardman, Siegfried, Rock, Seung Mina, Cervantes, Edge Master, Inferno, Voldo, Ivy, Sophitia, Mitsurugi, Kilik, Xianghua, Maxi, Nightmare, Taki and Astaroth. So 19 dudes and dudesses all up!
Naturally each has their own fighting style, which varies from characters that throw and clobber with massive impact, to those who are fast, but not very nasty.
The first thing you’ll notice when you play this, are the improvements over the System 22 (?) arcade version. The characters now have a lot more detail, and the resolution appears to be a lot better than the arcade original, which is saying something about how good the Dreamcast can be. Not only that, but there’s heaps of extra stuff, inlcuding a special mission area, where you have to take on numerous fighters, or fight poisoned and even on a stage that’s really thin.

Also inlcuded in this sensational game is the fabulous Museum mode. This includes an art gallery of 338 pictures, inluding fan art, the game’s story with pictures, a slide show and many other tasty images. Also Battle Theatre, which let’s you watch 2 CPU controlled fighters battle it out for victory. Plus character profiles, giving you the utmost low-down on the fighters. Here you can check out info on their weapons, their stage, their speech, their game ending, the whole shebang!
Also of note in Soul Calibur is the ability to pause the game and look up a move. Every one is nicely listed into Horizontal, Vertical, Kick, 8-Way Run, Special and Throw moves. Plus while you’re training, you can get the game to demonstrate a move for you on the spot.
You can also choose Survival, Extra Survival and Team Battle modes, plus take on a real person in Versus mode and Team Battle Mode.
Now if that doesn’t make you drool, Soul Calibur also looks absolutely amazing, as these yummy screenshots will prove and it all runs at a smooth 60 frames per second, the whole way. Mmmmm…
Getting the game now may be a tad tricky, considering the poor Dreamcast isn’t being produced any longer, but nevertheless, you should be able to find a 2nd hand copy or maybe a new one, for a very reasonable price.

Graphics: Outstanding! Beautiful sword / weapon effects, top looking characters and some mighty fine backgrounds. 98%
Animation: Smooth, right from start to finish. Just how every game should be! Excellent character animation also. Not a jerk in sight. 99%
Sound: “Ching, ching, ching. Bsh, b-bsh, bsh, bsh.” Really great sound effects and some good voices as well. Some of the music sounds a bit similar in style, which isn’t too bad a thing, I guess. The “This victory strengthens the soul of…” can get a bit monotonous after a while. 93%
Playability: It’s coming out of it’s ears in this department. Fantastically responsive controls, brutal combos, the whole dang lot is spot on. 98%
Lastability: Even though the pure joy of playing this game should have you hooked, the amazing extras that this has will have you playing for yonks. Yonks, I tell you! 97%
Overall: Possibly the best fighting game on the Dreamcast, and definitely one of the greatest fighting games around. Yeah, D.O.A. 2 is awesome as well, but this, I feel has the finer edge, especially considering the greater amount of characters. Namco, you’ve won some more respect from me for this excellent title. 98%

Look out for Soul Calibur 2, now on XBOX!