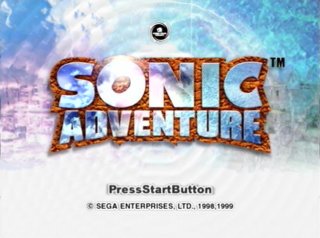 Sonic Adventure sends Sonic into the land of Dreamcast. Visit Station Square, Mystic Ruins and fly through the clouds on the Tornado with Tails.
Find the shards of the Master Emerald with Knuckles, get away from a nasty robot with Amy, hunt down robots with Gamma, the robot, find “Froggy” with Big The Cat and fly after Dr. Robotnik with Tails.
If you don’t count Sonic 3D, which was really a 2D isometric game, this is Sonic’s first 3D adventure / platform type game. Sonic did, of course make 3D appearances in the bonus game for Sonic 3D on the Saturn, Sonic R and Sonic Jam, but this is the full deal!
Each stage has three missions to complete, A, B & C. Each a little tougher as you go. The 2nd and 3rd of these usually require you to finish the level in record time or with a certain amount of rings. Some of them can be quite tough, and others pretty simple. You’ll need to get to grips with the levels in order to do these well. After you complete each of these, you are rewarded with an emblem. There are about 150 to get all up, and this is pretty tough!
Sonic’s self appointed girl-friend, Amy Rose, who first appeared in Sonic CD, is now more of a fully playable character in this adventure, and uses her special hammer attack to clobber enemies and jump large heights. Each of her stages requires you find a balloon to get out, and to avoid the pursuit of a particular green robot.
The game also shows the past of Knuckles, the spiky red echidna, with a cool area of lots of his fellow creatures, and an impressive watery shrine for the Chaos Emeralds with nice reflective water.

Another cool spot to be is Casinopolis. Here, Sonic gets to take part in playing some pinball, where you can choose from Sonic or NiGHTS tables in this area. Sonic Team really went to town on this stage, with bright lights, and lots of detail, including sailing ships way up at the top of the room, and a massive golden statue of Sonic.
Within the NiGHTS table, if you manage to crack off a combo of cards, the door at the back of the table will send you off to a second table. (That is if you manage to fire Sonic correctly into it.) Once here, you’ll get the chance to zip over Twin Seeds City with NiGHTS, and on returning to the 1st table, you’ll zip through Spring Valley, where you’ll even spot some of those cute Nightopians. Here, with a bit of trickery with the L & R Shift buttons, you can get Sonic through NiGHTS’ palace, and if done correctly you’ll score yourself an Ideya. Get them all, and you’re a real pro! If you don’t have 100 or more rings in the pinball games, and you lose all of your balls, Sonic will get dumped in the underground garbage. Make your way then, through the foul tunnels and murky walkways of the underside of Casinopolis, and head on back up with the help of a ladder. Reach the top, and Sonic can take a shower. Knuckles also gets to exlpore this nifty area, although he’s searching the joint from top to bottom for pieces of the Master Emerald. Be sure you smash open the golden Sonic statue, in case you detect a shard near by. Look out too for the huge Lion, but don’t get squished!
At various intervals throughout the game, Dr. Robotnik will show his nasty self and also the creature, Chaos, who is made from water. Dr. Robotnik has decided to use this fellow to help him with his devious plans, and uses the Chaos Emeralds to power it into an evil form.
At the beginning of the game you will see a swat team trying desperately to stop Chaos, but their bullets go straight through him, and do nothing. Luckily, the world’s greatest hero, Sonic, is there to save them. With 3 well timed hits to the head, Sonic sends Chaos down the drain. But for how long? With the help of Tikal, the echidna, they will all help to restore peace.
Sonic Adventure plays just like any Sonic game should. It’s fast and full of action. Sonic and his buddies have mastered a few new moves as well to help them on their way. Sonic can now charge up a Spin Dash, and fly across a bunch of rings, when he has the Light Speed Shoes. He can even home in on enemies with 2 presses of the jump button, just like having the gold / electric shield in Sonic 3D. Tails can whip enemies with his tails when he finds the Rhythm Badge and Knuckles can dig into the ground and walls with his claws.
One bad point about Sonic Adventure is that the camera view always seems to get stuck behind a wall or some other object at the wrong time, and even with the rotate feature, you still get all messed up, not knowing where to go. Some of the collision detection is a bit iffy in the final fight against Dr. Robotnik also. Numerous has been the times you just fall through the floor of the “bridges.” Those bad points aside, Sonic Adventure is an excellent game all round and has plenty of things for you to do. Each character goes through their part of the story, and they meet up from time to time in certain common areas, and that’s a great touch. It may be an early Dreamcast game, but Sonic Adventure is still worth getting, if you didn’t buy it first up, and you’ll probably find it pretty cheap now.

One of the spiffiest looking environments in the game is the area of Mystic Ruins, but in the past, when several of the characters meet up with Tikal, who usually appears as a spinning orb of light. Here’ll you’ll find lots of other echidnas, which you can even chat to, and Tails can go and explore the area where the master emerald is kept, which looks really cool also. This stage would make a great Unreal map I reckon! Heh, heh. There doesn’t seem to be any way to return there later in the game and it’s a pity, because it looks so awesome.
If you’ve played the Mega Drive version of Sonic 3D, you may recognise a very similar version of the music in Green Grove Zone, in the 2nd part of Windy Valley. (For me though it was actually the other way around! :-P)

Graphics: This game really shows off just some of the cool stuff the Dreamcast can do, and it still looks good now. Sonic looks true to his original 2D self, as do the other characters. There’s great effects all throughout this, including the mighty impressive multi-reflective walls that Amy passes, the nifty lens flare effect, light beams, flowing water, great looking shields and some damn great lighting. One of the most appealing levels would have to be Lost World, and you’ll see why if you play it! Great textures, the 3D rings and bright colours make this look really magic! 95%
Animation: Sonic Adventure plays really smoothly, especially if you have it in the 60Hz mode. 91%
Sound: Good quality music and speech and a broad range of different effects. The sort of thing you’d expect from Sonic Team. 94%
Playability: Easy to play up until some of the last levels, which can get a bit tricky, especially if the camera bodges you round. Some of the 3rd missions for each level seem impossible. Nevertheless, Sonic Adventure is heaps of fun. 86%
Lastability: There’s heaps and heaps of missions to complete and a large range of levels to explore. This should keep you busy for a while. 88%
Overall: The Dreamcast’s first Sonic game really delivers and shows just what Sonic gameplay is all about. Amazing fantasy landscapes and that fast Sonic speed. 92%