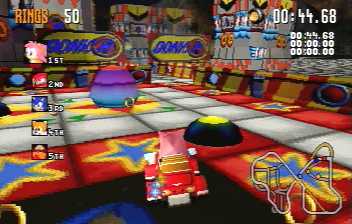 Sonic goes out racing again for the 1st time since Sonic Drift 2 on the Game Gear. This graphically awesome looking game once and for all proved (to me at least) that the Saturn could definitely wipe out everything on the PlayStation, and half of the Nintendo 64 stuff. Not surprisingly, either. Main programmer, John Burton, from Traveller’s Tales, who was comissioned by Sonic Team to create this legendary game, said that if the game were to run on the PS, the fading in scenery would knock the frame rate down to around 10 f.p.s. and the rippling reflective water couldn’t be done at all. Not to mention the huge amount of polygons whacked into the game.
Adding to the eye candy that are the 1st 4 courses in the game, comes the droolific 5th track, Radiant Emerald, which plopped out a completely transparent track with an unusual “flowing” texture effect.
Control of the characters is pretty simple, and very “Sonicy.” As the race starts, you jam the old d-pad down, and with the “B” button spin your character up to speed.
On every course, you’ll find a booster which’ll suck up to 50 rings out of you for a big speed boost. Opening doors requires an exchange of rings as well.

Initially, there are only 4 characters to choose from, and only 4 courses, also. Collecting gold coins, and collecting Emeralds will aid you in unlocking these extra features.
The replays are pretty nifty, showing you around the tracks and great top down views that often show off the texture quality well.

Graphics: Simply some of the best stuff. The scenery fades into view through various levels of transparency and eliminates drastic pop-up. Plus it even looks really cool to boot. The reflective ripply water is simply breathtaking, especially off in the distance, and at times is almost up there with the likes of the water effects in Dead Or Alive 3. The characters all have dynamic lighting and are well detailed. Cool shield effects, lovely 3D trees and tufts of grass, top notch textures plus spiffy backgrounds. The menus are all done nicely also, right down to the Options screen, with nice colouring and layout. 98%
Animation: 30 frames per second all over makes this quite smooth. No apparent signs of slow down, and cute character animation also. 97%
Sound: Catchy music (with the words included in the instruction manual,) and classic Sonic sound effects. Clear speech also. 97%
Playability: It’s so easy to play, it’s not funny. Could’ve been a bit more challenging. 91%
Lastability: Well, I got this in 1998, and I still play it quite often. So top marks here. Fun with 2 players also. Although a few more tracks wouldnt have hurt. 94%
Overall: A different outing for Sonic than usual, and a nice one at that. Quite tricky find now, but still for us Saturn fans, all I can recommend is doing a hard, long search for places that specialise in rare games and what not. You may have some luck on the Internet somewhere. Anyhoo, this is really a great game, and if you spot it you shouldn’t think twice about buying it. 95%