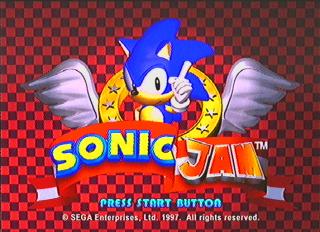 Sonic Jam is a funky collection of four great Sonic titles. Sonic 1, Sonic 2, Sonic 3 and Sonic & Knuckles. It also includes a cool 3D world, called “Sonic World,” which was actually the basis for testing Sonic in 3D to see how hed go on the Dreamcast. Thats a fact.
I got the game on the 15th of November 1997, which was about the time it came out. In Australia where I was anyhow.

“Dr. Ivo Robotnik, the mad scientist, is snatching innocent animals and turning them into evil robots! Only one tough dude can put an end to the demented scientists fiendish scheme. Its Sonic, the real cool hedgehog with the spiked haircut and power sneakers that give him super speed… Spin through space, loop til youre dizzy, save the animals and become the super hero. Be Sonic! Be atomic!”
“Dont just sit there and waste your precious time. When you want to do something, do it right away. Do it when you can. Its the only way to live a life without regrets.”

Sonic first appeared in 1991, and since then, theres been a truckload of Sonic games. For those of you who missed out on the Mega Drive versions of these games, youll be pleased to know that Sonic Jam keeps these exactly as the originals were. Although finding this top Saturn title may be quite difficult now, if you do find it, then its definitely worth considering.
Sonic 1 has now got the added bonus of the Spin Dash, that was introduced in Sonic 2, and of course, if you want to play it how it was originally intended, then you can just leave that option off. Sonic & Knuckles also retains its innovative backwards compatibility, allowing players to “lock on” any of the other 3 Sonic The Hedgehog games. As you may already know, connecting up Sonic 1 will just give you lots & lots of “randomly” generated Special Stages. With Sonic 2, of course you can play through it with Knuckles instead, and the massive Sonic 3 and Sonic & Knuckles combo will have you playing for hours. Especially if youre as hopeless at it as me.
You can also play all your fave Sonic tunes in the Music Shop* located in Sonic World.

Also in Sonic World, you can visit the Movie Theatre to watch cool Sonic Ads and other videos of yore and the Character House which has lots of sketches of Sonic and his buddies, and Dr. Robotnik and his meanies. Youll also find the Museum where you can find out Sonics history and the Gallery where you can check out lots of cool artwork. Laaahvley!
If you view the CD on your computer, youll notice that all 4 games were re-programmed to an extent for the Saturn, and arent simply just emulated. (Although some of my pics are from emulated versions because they look clearer. The Sonic World pics are from my real Saturn though.)

Graphics: Well, the Mega Drive games arent exactly Saturn quality, but they still have that well polished look and Sonic Team style. The Sonic World part looks fantastic, especially with the ripply transparent water. It has a great draw distance also with no pop up action. You can also do some neat mini games here also. 80%
Animation: There are few cock ups when Sonic hoons down some of the hills and hell jam (no pun intended) instead of flying up like in the original versions of the games. Other than that, its as smooth as can be. The Sonic World part runs nice and smooth too yknow, and lots of extra neat things going on, like Tails flying about, and flickies going along and stuff. 90%
Sound: Everything sounds nice and Sonicy. Yeah! 90%
Playability: The original Sonic games retain all their usual playability, apart from those peculiar bits where Sonic sometimes gets stuck. The Sonic World bit feels a bit “dense” at times, like your control isnt quite as precise as it could be. 85%
Lastability: Theres lotsa Sonic playing action to be had here folks. 78%
Overall: A nifty compilation all in all, but perhaps one or 2 extra games could have made it even better. Maybe Chaotix or SegaSonic Arcade too. Oh well. The extra stuff you get is top stuff though. 91%