Arcade Hardware: Model 2A board
Save Requirements: 80 blocks
Genre: Racing. 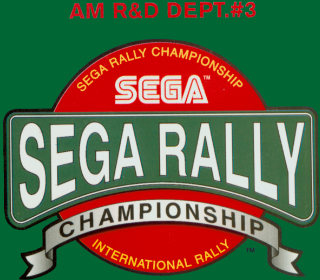 Sega’s greatest arcade rally game, (actually about the only Sega arcade rally game, that I know of,) and some would argue, Sega’s greatest racing game of all, made a spectacular appearance onto the Saturn, with barely any sacrifice from that of the original. Running in a slighty lower resolution, and at a solid 30 f.p.s. this game goes down as one of the best arcade conversions there is on the Saturn.
The game is pretty much a standard conversion of the original, but with a Time Attack mode included, plus a few other extras.

Unfortunately my copy of the game cracked, so I’m on the hunt for another copy. Luckily I’ve had it for yonx to continue the review. (Why do all my best games die?) — Thursday, 3rd of April: “Yay! I found another copy!”

Anyway, one of the 1st things you’ll notice with the game is the excellent car handling. For those of you who’ve never played anything like this before, then you may need a bit of practise getting to grips with the thing. Becoming a master of the game takes lots of practise. The cars include the Toyota Celica, Lancia Delta HF Integrale, or something like that & the Lancia Stratos, which is a bonus car. Apart from the standard arcade version Practise & Championship Modes, there is also a Time Attack mode included, which I mentioned earlier. This comes in handy for learning the tracks, to get a feel for the cars and the best way to drive.
When you start in the Championship Mode, for those of you who don’t know, you firstly start on the Desert track, progress onto Forest, Mountain, & finally Lakeside. To race on the Lakeside track, you’ll need to get a first place at the end of the Mountain stage.
With a bit of good practise, you should be able to come 1st with the Normal difficulty with no drama. ;-) This then shows you the full credits also at the end of the game. 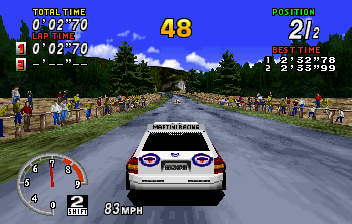 Graphics: Despite that the Saturn couldn’t do the texture anti-aliasing of the original Model 2 Board version, it still manages to look very accurate. The Forest course has some nice textures on the road, and the Mountain & Lake Side courses look top notch. 90%
Animation: Yummy & smooth. Much smoother than the 2nd version on the Dreamcast also. Not a sign of slowdown any where. Look out for birds flying, animals moving, the helicopter etc. Beautiful. 98%
Sound: Great music, and fantastic sound effects. 97%
Playability: This plays like a wonderful dream. One of the most playable racing games ever. The car handling is amazing, and is one of the main reasons why this is so good. 98%
Lastability: After all these years, I’m still cracking this out with excitement. Top notch stuff, I say! Most addictive. 97%
Overall: An awesome driving / rally experience. This is one of those pinnacle games that you should have. 96%


Cheats:
To access Mirror Mode, go to the Championship or Practise selection area, and hold Y, and press C to select the one you want.