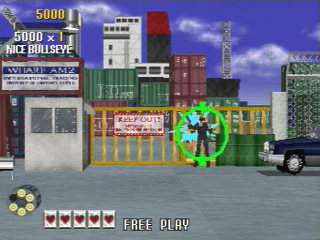 I actually got Virtua Cop this year, in 2014, so much later than when I got Virtua Cop 2. After hearing about how Virtua Cop 2 ran faster, I thought that the 1st game would be jerky and slow, but it isnt anywhere near as bad as that. Its pretty fast and smooth, and I reckon its more challenging than the 2nd game so far. Maybe because Im not so used to it yet.
Graphically, the 2 Saturn games are pretty much the same. The 1st game however, has some neat pseudo reflections in various windows which you dont really see in the 2nd game.
The gun line up is pretty much the same stuff as well, although there seems to be a high speed gun which you can cheat to get, which I dont recall being in the 2nd game.
There are 3 main stages, and like V.C. 2, you can choose which one to start on. Unlike the 2nd game though, your high score seems to be reset if you continue.
While there isnt quite as much background stuff to shoot up as there is in V.C. 2, you can blow up barrels, find guns in crates and break a lot of glass as well, such as small windows and on cars.
Disarm one of the crooks, and youll get a NICE BULLSEYE score of 5000 points. Time to start aiming carefully!

Graphics: Not really that far off Virtua Cop 2. At least as far as the Saturn version goes. The reflective looking windows are neat, and most of the texturing is pretty decent. 85%
Animation: Pretty smooth, all in all. Explosions, breaking glass and people moving about are pretty good. If this is supposed to be running slower than Virtua Cop 2, I didnt really notice it. 96%
Sound: I think I know the music better in the 2nd game, so I think thats why I like it better. Most of the effects are good, such as explosions and gun noises. 82%
Playability: Fast and action packed. Some of it actually seems quicker than V.C. 2, with numerous enemies appearing at once, keeping your shooting finger moving. Youll need lightning quick reflexes on the bosses, and to reload your gun. 95%
Lastability: You can always come back to aim for a higher score, or to try and get further without continuing. 84%
Overall: A great game for your Saturn, even if you have the 2nd game already, like me. Probably one of the better choices for gun games on the Saturn. 94%