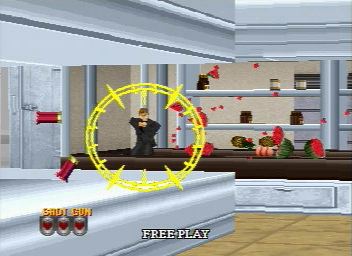 Possibly one of the best arcade conversions to the Saturn, Virtua Cop 2 brings you all the action of the original, plus several other Saturn exclusive features. The Virtua Cops come back in this sensational sequel to battle it out with more scum gang members over 3 well detailed stages. Following that is the short 4th stage where you take down the final boss. While you can use a control pad to play this, the Virtua Gun is just so much better. Mainly because its quicker to move it around the screen. My game was actually a package deal with the gun. (I still have the box too.)
To make things more interesting, each of the 3 main stages has a choice of route, which you can shoot to choose. At certain points throughout the stages, youll be given a score run down with your accuracy, how many baddies you shot and any innocent people as well.
File 1: “Big Chase!”, as its called, sees you coming in in the middle of a jewellery store robbery, which then leads to a chase down to a multi-storey warehouse. Following that, you move along to a whole storage type district. File 2, which is “Save The Mayor,” has you shooting down baddies dropping from helicopters, passing a cruise liner and then through a building onto the ship. File 3 is “Railline Shootout,” and as the name suggests, involves a lot of train action. You’ll also pass into a car park and then an air ship which takes off for the final stage. You can play the levels in any order you like, apart from file 4, which always comes up last. You can however, jump straight to it by constantly shooting the red arrow coming out of the bottom of the Beginner picture on the Stage Select screen.
Normally extra weapons are only available when you find them in the levels, but in the options you can switch on a selection feature to let you go through all the available chocies. You can then use the shotgun, machine gune, rifle, etc.
Shooting an enemy 3 times before they disappear will you get you a bonus, but if you pull off a Justice Shot, by shooting an enemy in their arm, youll get a lot higher score. This can only be done once though. In addition to the usual Virtua Cop 2 style of playing, you can also revert to the Virtua Cop 1 target system and scoring. Be sure to check out my cheat guide thing for extra info, such as the ability to randomise the enemies.

Be sure to look out for all the various images of Sarah from the Virtua Fighter games too. Youll even find a wall mounted picture of her that can be shot down. In File 3 in the area before you get to the air ship, be sure to shoot at the lights on the ceiling for extra goodies! Virtua Cop 2 gives you truck loads of things besides the enemies to shoot. You can take out car tyres and windows, glass cabinets, bottles, cans, melons and pineapples, vases, pot plants, telephones, computer monitors and plenty more stuff.
As usual with these kinds of games, the options has an area for you to set the accuracy of your gun. Its important to line it up well to begin with in order to get good accuracy during the game. While it may not work with all TVs, I found with my one that if I put the gun really close to the screen, I can get it a lot more accurate during the setup.

Graphics: Pretty dang accurate to the arcade original, and well detailed all the same. Some of the textures are a bit blocky, but most are pretty good. 86%
Animation: Not a hint of slow down. The enemy characters move well, as do helicopters, road vehicles and trains. 96%
Sound: Great music and lotsa nifty sound effects. Shooting up the fruit, smashing glasses, cars blowing up etc. There’s an effect for just about everything. 96%
Playability: Aim the gun, and pull the trigger. It doesn’t get much easier than that. You can tweak the range of the collision in the options if you find your shots are not often hitting their targets. Some enemies in the corners of the screen can be awkward to hit if your gun isn’t set up properly. 95%
Lastability: Despite being able to play through it fairly quickly, the fun factor will still get you back. Especially if you’re after improving your score more. 84%
Overall: Definitely a worth while buy for your Saturn collection. Virtua Cop 2 is a classic from the AM 2 pros. 94%