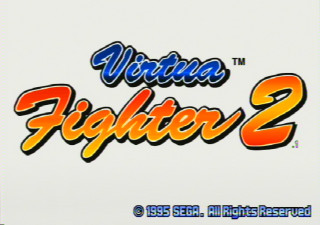 Virtua Fighter 2 on Saturn brings you all the arcade action and more right to your house. With new Team Battle mode, over 2 000 moves, and running in the Saturns yummy 704 × 512 pixel mode all at 60 frames per second, this is the fighting game that has it all.
Youve got 10 fighters to choose from, and these are Akira Yuki, Shun Di, Sarah Bryant, Jacky Bryant, Lion Rafale, Wolf Hawkfield, Jeffry McWild, Pai Chan, Lau Chan and Kage Maru. Plus if you press D, U, R, A + Left Shift, you can play as Dural, the metallic clone of Kages mother, supposedly. When you first play, youll instantly see how wonderfully smooth this is, and being Virtua Fighter, its so enjoyable to play. With the extra buttons of the Saturn control pad over the arcade version, you can assign other buttons different button combos. I set mine up with “A” for guard, “B” for punch, “C” for kick, “X” for punch + guard, “Y” for punch + kick, “Z” for kick + guard and “Left Shift” for all buttons.
Some of the easier characters to get started with are Sarah, Pai, Lau and Kage, because youll find they have good P, P, P, K type combos. Then when youve mastered the game more so, you can move on to the likes of Akira and Wolf, both of which are vastly different from each other.

Virtua Fighter 2 also made a peculiar appearance on the Mega Drive. It was sprite based, naturally, with the lack of Lion & Shun and some of the backgrounds, and moves, but AM 2 somehow managed to crack off a pretty decent version of it, none the less, despite looking quite icky compared to the Saturn version.

Graphics: This really demonstrates what the Saturn can get up to. With the high resolution, excellent textures and bright use of colours, it really looks superb. Check out the funky wobbly background on Durals underwater stage! 89%
Sound: Nice metallic thumps, whacks, and the like. Some of the voices are a bit low quality, and the hit sounds can be a bit un-realistic, but that said, the music is excellent. 71%
Animation: No slowdown what so ever. The Saturn runs this at 60 frames per second the whole way, which makes playing it un-mistakably spot on. 98%
Playability: The game is easy to get into, although some of the later stages on higher difficulities will test your skills out. 92%
Lastability: Once youve completed all the different modes and stuff, youll still want to come back and play this. Extra lastability is assured in 2 player mode! 86%
Overall: Another classic AM 2 conversion from the arcade classic. Play this on a big fat huge screen T.V. for maximum entertainment! This is a masterpiece. 94%

Virtua Fighter 2 on the Mega Drive