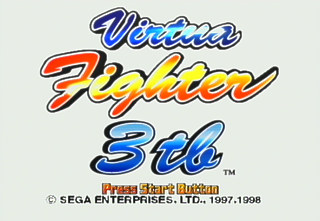 AM 2’s Virtua Fighter was the 1st 3D fighting game made. Originally using the Model 1 board, the game progressed on to Virtua Fighter 2, using the Model 2 board, and then Virtua Fighter 3 & V.F. 3 tb on the Model 3 board. This was then later followed by Virtua Fighter 4 on the Naomi 2 board and Virtua Fighter 4 Evolution. Virtua Fighter made many appearances on consoles as well. Originally on the 32X and Saturn, and a special Virtua Fighter Remix for Saturn & PC. Virtua Fighter 2 made appearances on the Mega Drive in sprite format, Game Gear (somehow), the Saturn and PC. Shortly after this, was Virtua Fighter Kids for the Saturn, featuring quirky “childrenised” versions of the V.F. 2 characters. Virtua Fighter 3 t.b. made it out for the Dreamcast, after much talk of a Saturn version with enhancement cartridge. V.F. 5 is the newest of the games, and you can get it for the XBOX 360. (Yeah and the PS 3 also.)
First of all, let’s get some things straight about Virtua games. There’s been that many mistakes regarding the spelling of these, it’s not funny. Even Sega Europe’s arcade game site has errors. Firstly it’s Virtua Fighter, Virtua Racing, Virtua Cop etc. with no “L” The exclusion is Virtual On. Anyhow, on with the review…
Virtua Fighter 3 features the new Dodge button, and View button as well, 2 new additions over that of V.F. 2. Dodging was previously only available in a reduced kind of way to that of the likes of Lion & Shun Di, but in V.F. 3, each character can dodge and walk around. Using the View button, you can change the current view point of play.
If you have a 6 button control pad for your Dreamcast, you can successfully get most of the buttons and combinations worked out onto whatever buttons you prefer. Using the standard pad, however, you’ll have to make do with the poorly placed 4 on the front, unless you have an Arcade Stick.

Each of the characters have a unique set of moves, and although some share similar combinations, such as the P, P, P, K type, you’ll find that no 2 characters are the same. If you’re looking for a fighter that’s fast, and agile, you might want to try Sarah. If however, you prefer monsterous damaging throws and big grunty moves, you might choose Wolf. Or if you just want to get plain freaky, then Drunken Kung-fu master, Shun Di, is probably your best bet! By pressing the Start button as you choose a character, you can then fight in their alternate costume, and in a 2 player game, you can also choose the stage on which you want to fight.
Now if you’ve been living under a rock, or something along those lines, and don’t know what the t.b. part of the game is, then I guess I better fill you in. With the original V.F. 3, it was basically like the previous 2 games, except with another 2 new characters, and new backgrounds and what have you. Anyway, AM 2 obviously decided to spruce things up further, and the result was a Team Battle mode, for V.F. 3 t.b. This mode lets you pick a team of 3 fighters, and you battle it out to the end of the game taking on random characters for every round. When you finally reach the end, you’ll have to take on 3 rounds of Dural, only this time, she turns transparent every now & then, which makes seeing what she’s up to more difficult. Also of note in the Team Battle mode, is that it now snows on the snowy stage (obviously) and there’s probably some other changes too that I couldn’t be bothered to look at right away.

Graphics: Virtua Fighter 3 won an award for the best graphics in a game, for its time. Still, even now, it looks quite yummy, despite some yucky looking background bitmaps here and there. Plus the characters look pretty decent too. 90%
Animation: Not quite as smooth as the likes of Soul Calibur and Dead Or Alive 2, or even Virtua Fighter 2 on the Saturn, but not bad, either. Some good background animation too, from birds flying past, to trains zipping by, and waves coming in and out and flowing water, falling snow, etc. 88%
Sound: The sound effects are good, but not really great. Some sound a bit fake, although whacking Dural a few good clobbers, does sound pretty yummy. Some very nice music also. 89%
Playability: Here the game shines. The thousands of moves and precision of fighting offered makes this stand out from the crowd. More in depth than any other fighting game I’ve played. Apart from version 4. 97%
Lastability: You’ll be coming back and back to play this over and over. Especially on the Team Battle mode. Top notch with 2 player fighting also. 95%
Overall: Well, my Dreamcast chucks a wobbly every time I load this, and resets itself, but I still keep forcing it to get off its backside and run it. A great conversion from the Model 3 Arcade version, and a top fighter anyway. This is superb. Plus it pees all over any of Namco’s Tekken games. 96%