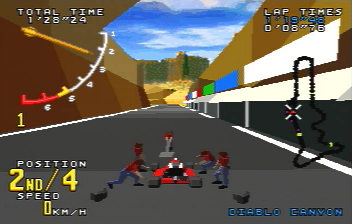 Virtua Racing, one of the 1st 3D racing games, and the pioneer of “T.V. camera” style replays zipped onto the Saturn with a pretty spot on conversion. Previously having made appearances on the Mega Drive and also the 32X, and later a deluxe version on the Saturn (I think,) the copy that I have is the standard Time Warner Interactive’s Virtua Racing, licensed out by Sega. This version contains numerous tracks, previously unseen in the arcade or 32X version. All in all there’s 10 courses, and these are: Amazon Falls, Speedway, Big Forest, Alpine, Bay Bridge, Surfer, Diablo, Acropolis, Metropolis & Pacific. Cars include the Go Kart, Coupe, F-160, GTP & F-1. The Go Kart is quite an easy vehicle to handle, although it’s not very fast, whereas the F-1 end of the scale is the other way round.
Overall the handling of the vehicles is pretty good, and you shouldn’t have too many troubles with the standard Saturn pad. I haven’t tried it yet with my steering wheel, so when I do, I’ll let you know. ;-D
Graphically, Virtua Racing is quite simple by today’s standards, being that it’s simply flat shaded polygons with no texture mapping. Despite this, and being a very early Saturn game, there are times when you notice a slight bit of slowdown, but it’s not too bad. Unfortunately the last time I played the arcade version of the game was back in 2002, in England, so I don’t remember too well what it was like then. Prior to that, the only other time I saw it was at Mittagong, quite some time back. Overall though, the Saturn version is an excellent product. Especially with the extra tracks. That said though, it still isn’t exactly up there with Sonic R, Daytona USA CCE or Sega Rally for looks, but do remember that it’s an earlier title, and 10 tracks was pretty decent for back when this came out.
Its a pity this wasnt upgraded to one of the Saturns higher resolution modes. Games like Scorcher proved it was possible. Instead, it seems to be running in a 11:7 aspect ratio of 352 × 224 pixels. The arcade version was 496 × 384 pixels, like every Model 1, 2 & 3 game, although it also had an option to change the aspect ratio for wider monitors.

Graphics: Hardly the sort of thing that pushes the Saturn to the limits, but fairly accurate to the original none the less. Probably more suited to the 32X. At least theres no pixelation. 68%
Animation: Pretty smooth overall, but not overly great. I find it a little strange after watching texture map pixels / texels zipping past, rather than big polygonal chunks of track. Background animation includes moving them park attractions, seagulls flying out of the way and what not. After capturing some of the game, it seems that the frame rate varies between probably just under 25 f.p.s. and something a bit higher. 75%
Sound: Apart from the short bursts of music when you clear a checkpoint and the engine noise and skidding tyres, there isn’t much else to mention really. The music is catchy, but it’s very short. 70%
Playability: Pretty easy to get into once you master the tracks. The car handling is good also. 85%
Lastability: The Grandprix mode sets you up quite a few challenges that should have you playing for quite some time. 82%
Overall: It may have come out like about 12 years or so ago, but even so, it’s a good game with good gameplay also. Over shadowed by many a racing game now, it’s still worth cracking out to have a burl at from time to time. 76%

• Not really a cheat as such, but in the Amazon Falls track, you should find a secret route. When you get to the 2nd hill area from the start line, you should spot a red & grey barrier on the right. It’s a bit hard to see, but If you drive through it, you should come to another part of the track. This takes you right through the middle of the circuit, but it’s not counted when you drive through it, so you’ll have to complete the rest of the lap properly. Worth having a peek at in Practise mode none the less.