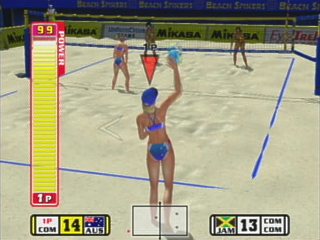 Ah, soft sand, bright sun, and pretty girls in bikinis… what could be better? AM 2 brings it all together with great competitive beach volleyball action, straight from the Naomi 2 board arcade game. You can make use of the GameCube’s 4 controller ports to create a 4 player game, or you can simply challenge your own skills by yourself. You can choose teams from a wad of various countries, including Australia, Brazil, Japan, Canada, Thailand and England. The game features a very handy tutorial mode, that goes through multiple techniques, and gets you to perfect each one in order to get it through to you how to have some successful play. Starting with the arcade mode is a good way to get into the action, and when you’re confident enough, you can go for the World Tour. You can customize your beach babe, and your team mate, (or playmate as it says on the back of the box,

) with various types of hair colour, uniforms, and faces. In VS Mode, you can play Beach Spikers, Beach Flags, Beach Countdown or Beach P.K. which adds a bit more flavour to proceedings.
Watching your opponents carefully and making split second decisions is the key to winning time & time again. You might want to drop a shot close to the net which your rivals simply don’t expect, or you may want to apply the pressure, by smashing the ball hard. Then again if your opponent is blocking you, you may want to use an attack that spikes the ball at their hands, causing them to drop the ball. Either way, if your rivals touch the ball and drop it either in or out on their side, you score the point. Some of it’s a bit like tennis, with deuce, and match points and so forth. You need to get to 15 points to win, but if your opponent is on 14, you need to get 2 ahead, and if both teams are playing really well, you can end up going on and on for quite some time.
All in all, the game is initially tricky to get the hang of, but you’ll learn fast how to play better and better each time. Getting to know where the ball may land is obviously an advantage, but it doesn’t always come over the net like you’d expect, so you always need to be on your toes. If you can outwit the opposition, then you’re on your way to becoming more successful.
Some shots in the game require more power than others, so you need to keep an eye on the gauge on the left hand side. You may not always want the ball to be sent over at full power, but you need to meet the minimum requirement for the shot you’re going to make, or it’ll hit the net on your side, and then the other team will score.
It makes a nice change to see a sports game that’s something quite different, in amongst the deluge of football, soccer, basketball and golf games that are out there. There’s an obviously noticeable “sexy factor” which AM 2 have added into the game — girls congratulating each other with various touchy-feely embraces — see my screenshot — but at least it’s not something violent. That said, perhaps some of the ladies would’ve liked to’ve seen some of the doubles match fellas in Virtua Tennis have a bit of a grope before the next round…
When I got this at The Games Wizards, it appeared to be “3rd hand”, ’cos it already had a sticker on the box from some pawn shop, but they’d even whacked on there that it was a retro game! Uh, hello, retro? This game came out in like 2002! Retro is like stuff from back in about 10 years before that, not on the 2nd newest home console you can get. (At the time I wrote this it was.)
If you look close enough in the game, you might just spot the cute Chums Gum advertising logo from Daytona USA 2. 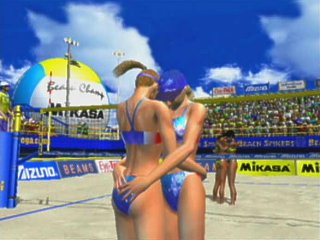 Graphics: Great looking sand that dents as the gals move around, and where the ball lands, plus swish looking backgrounds, good quality texturing and excellent looking characters. 90%
Animation: Mmm, I like those winning poses!

Those close up embraces and hugs are quite intriguing. Uh, yes, and also, character movement is really good, plus you’ll find decent crowd movements and so forth too. Playing characters have various facial expressions, do high 5s, and even adjust their “pants”. As far as fluidity is concerned, the game runs at 60 frames per second most of the time, although I did notice a smidge of slowdown, but nothing drastic at all, so smooth as those chickie’s bottoms really.

92%
Sound: Fantastic! It’s all just so fantastic. A little too fantastic at sometimes — is that all that guy says? Other than that, there’s some good ball whacking noises, crowd cheering, and so on. The sand shuffling noise is a bit sus though. 84%
Playability: As I said, a bit tricky at 1st, but you’ll pick it up pretty quickly. 87%
Lastability: Quite addictive once you get into it… 88%
Overall: Sexy, suggestive and quite stunning too. If you’re into Beach Volleyball anyway, you should check this out, and even if you aren’t it’s still worth getting for all the great features it has going for it. 89%