Well it’s finally out! And here’s the page about it of course.

Whatcha get is 3 cool Sonic games, plus 6 bonus Game Gear titles, and a bunch of hidden ones also, that actually don’t really have much to do with Sonic. So what are all the games you get on the DVD? Firstly of course is Sonic The Fighters, which up until now has never been on any home system, and the only way you could’ve played it is in the arcade on the Model 2B board. This was THE game in the collection that made me buy the GameCube, despite what else was on the disc. After about 9 years or so of never seeing a home version, and a few times of hopelessly contemplating buying the arcade game, despite that it was butt hard to find, and cost more money than I could afford, I was finally surprised to see it in an image at Dreamcast Scene. 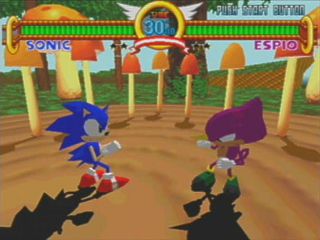 Initially the game is amazing to see running on your own T.V., but there are quite a few disappointing let downs with it, especially after waiting so-o-o-o-o long and all (and having to fork out for another console). Okay, the gameplay is all still there, and it’s very smooth, but the graphics look as if they were finished off by the work experience kid in some places, and whether they were like that or not in the arcade version is irrelevant, ’cos you’d think that Sega could’ve tidied things up a bit by now. Tails’ Canyon Cruise stage is a disaster, with the background being completely out of order. Distant polygons appear over foreground ones in huge big chunks, which completely spoils what would otherwise be a really good looking 3D stage. Isn’t that kind of thing what the Z-Buffer is supposed to work out? Knuckles I found was a bit iffy especially when he’s laughing, and his left eye has a funny black spot on it too. Other annoying graphical glitches are the flickering spots here and there where the polygons are overlapping each other, and appear to have not been placed far enough apart, causing them to occupy the same space. The audio is all good, and the animation is just as comical as ever, but just so disappointing to see those graphical bodge ups. I know it may sound like nit picking, but with so many other games that have such cleaner graphics, it’s hard to ignore it. On a side note, I get the feeling that Bean may’ve come from the game Dynamite Dux on the System 16 arcade board.
Secondly, Sonic CD. This rather large Sonic game took Sonic to the Mega CD, and also PC, with graphics along the lines of the original Sonic The Hedgehog (in terms of Sonic’s styling, the pickups and so forth). A certain pink girlie named Amy made her appearance here also. Having never played the game before, it really is nice to see how good this title really is. The music is excellent, although I did prefer the intro music that I heard in the video of it in Sonic Jam to this one. The sound effects are top notch also, and the “act clear” ditty is really catchy, even for something so short, and I love the sound of the “past” and “future” voice. Graphically Sonic CD appears to be spot on from the Mega CD orgininal, the animation is smooth, and the image is nice and clear looking too.
Thirdly, Sonic R. Programmed by Jon Burton of Traveller’s Tales in England, this game was written specifically for the Saturn, and was also later released for the PC aswell. The version in Sonic Gems Collection, despite what they tell you, is without a doubt the PC version of the game, because of the added weather effects, that new multi coloured streak on the booster, the lack of transparency on the Radiant Emerald track, and none of those sexy environment mapped Sonic head loading screens which made the Saturn game look so cool! Hmm… It’s nice to see the added weather effects, and times of day, and what have you, but personally I prefer the real Saturn version to this - the cool fading in scenery always did it for me, and the nice see through Radiant Emerald track, and the lack of that annoying elipse shaped transition effect all the time! It seems to me that the PC version was given the “you-know-what” end of the stick, and the Sonic Gems Collection version is like twice removed from the original.

If you have a Saturn already, try and get that version of Sonic R, ’cos it’s just so much more polished, despite the added weather dealies. If not, then this version is okay - it’s just like a different Sonic R though. Click here if you wanna see my Saturn review. 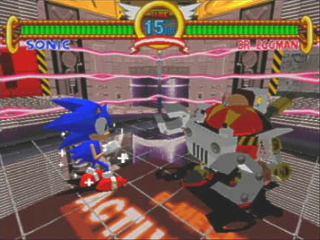 The 6 Game Gear titles are Sonic 2, Sonic Spinball, Sonic & Tails 2, Sonic Drift 2, Tails’ Skypatrol & Tails Adventures. The hidden games are Bare Knuckles, Bare Knuckles 2, Bare Knuckles 3, Bonanza Bros, Vector Man, and Vector Man 2, all from the Mega Drive. Why on earth these have been included is anyone’s guess, seeing as it’s supposed to be a Sonic collection. Some real gems to have included would’ve been Knuckles’ Chaotix, SegaSonic The Hedgehog Arcade, and maybe even something of Sonic X-Treme instead of any of these titles, but anyway, like I said, for me I only got this to play Sonic The Fighters. All in all, a total of 15 games, plus a lotta cool artwork, (which you’ll have seen quite a bit of if you also have Sonic Jam,) remixes of Sonic related choons, game manuals and even tips and cheats included. Not too shabby really. The games do feel a little odd on the GameCube control pad, rather than something that resembles the Mega Drive / Saturn pad that I’ve been used to and Sonic R’s buttons are back to front for me also. Luckily in Sonic The Fighters, you can setup things your own way. This game also has the moves listed from the pause menu for the character you’re playing as. The Game Gear games can also be played in 2 different screen sizes aswell, depending how you like them. Large, and somewhat chunky and blurry looking, or puny and clearer.
Mmm, so all in all, it’s worth buying, despite the things I was personally disappointed with. Unless you’re ultra lucky to have the arcade version of Sonic The Fighters, and I’m sure a few people do have somewhere, then this game is the closest you’ll get to playing that in your own home. The appeal of Sonic CD is also a good factor to buy this collection, aswell as the spot on conversions of the Game Gear titles. As for Sonic R, like I said, I’m sticking with my real Saturn version for play rather than this one.

Graphics: Well, this is a collection of older Sega games, so don’t expect flashy looking new special effects and loads of highly detailed 3D environments. You should really look at each game according to what year they’d been released I think in this case. Or something. It’s probably a toss up between Sonic The Fighters and Sonic R for the best looking games of the lot, followed by Sonic CD, and then the Game Gear titles. The 2D titles are the most accurate to the originals though. 87%
Animation: All the games are very smooth, and although there doesn’t appear to be a 60Hz selection, everything looks really fluid. 98%
Sound: All up, great sounding stuff. The intro video of Sonic CD isn’t the music I liked, but that’s just my opinion. The rest of the music is fantastic, and appears to be spot on from all the games. Sonic R retains all those catchy songs you can sing along to, and if the instruction manual in game is the same as my real one, you should find the lyrics in there too! 90%
Playability: Absolutely sensational! The GameCube pad, and some of the setups leave a bit to be desired, but apart from that, very good indeed. 88%
Lastability: Plenty of stuff to keep you occupied for ages here. Lots to unlock, and with the likes of Sonic R and Sonic The Fighters, you can come back time and time again to improve your times. 95%
Overall: Well worth forking out the dosh for, seeing as it’s only around $59.95. If you’ve been enduring the torturous wait of wondering if you’d ever see Sonic The Fighters in your own house, (besides forking out over a grand for the arcade version,) then this will probably be the game to make you buy this collection. Without it, I think Sonic CD is probably the only other game that holds it together. Mmm, and Sonic R I suppose. You can enjoy up to 4 player action in total, and benefit from 2 player action in Sonic Drift 2 on the same screen, like having 2 Game Gears! Nice. Lotsa rare gems here really, like the title suggests, so worth a look, especially if you want some Sonic variety. 90%