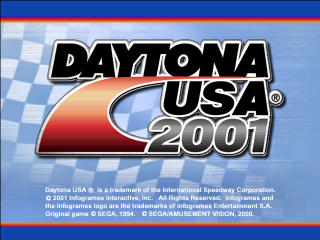 AM 2s Daytona USA is considered by many to be the benchmark of arcade racing games. It made it’s debut in 1994, and since then, 20 years later, this stunning Model 2 board racing game is still in quite a few arcades. Daytona USA was originally directed by legendary Yu Suzuki, creator of Outrun,Virtua Fighter and the more recent, Shenmue. Well, as far as I can remember. Circuit design however, is by Toshihiro Nagoshi, an absolute pro, who later worked on the excellent Scud Race.
With already 2 Saturn versions (, Daytona USA & Daytona USA: Championship Circuit Edition,) of this great classic and 2 PC versions, (the original and the Deluxe version,) Sega now brings round the most ultimate version of the lot. Daytona USA 2001 brings you 3 new tracks, Rin Rin Rink, Circuit Pixie & Mermaid Lake, along with National Park Speedway, Desert City & the 3 originals, 777 Speedway, Dinosaur Canyon & the massive Sea-Side Street Galaxy.
“YOU CAN’T BE SATISFIED WITHOUT IT… SEGA MODEL 2”
But maybe now you can. As the Dreamcast has such a heck of a lot of grunt up it’s sleeve, it’s no surprise that this version is actually superior, graphically, to the original. No longer do huge amounts of scenery pop up out of nowhere, and the texture quality is now far better. Also of note are the real-time shadows that look just fantastic when your car passes through them! Your own car too has a chrome look to it and transparent glass which is also a notable extra.
Playing tracks in mirror mode now shows off an evening or midday sky, depending which way you choose, and what track you choose! Bonus! Of course, it goes without saying that the gameplay is also top notch, and is exactly how you’d find the original.

When you first see the demo roll by on your own T.V. you’ll be amazed at how smooth this game really is. Even the 50Hz mode shows no slowdown, and the screen doesn’t even have any borders at the top & bottom! Amazing. This is far more than having Daytona USA in your own home, because this is that & more! Just get your mits on a big T.V. and this looks sensational.
The cars seem a little tricky to pick up on at first, but when you get the hang of it, they’re spot on, and handle fantastically. It’s pretty darn close to the original too. You can only use the analogue pad on your Dreamcast controller, but you shouldn’t find it too difficult, if you prefer the digital pad usually. I find this a huge improvement over the digital pad, such as on the standard Saturn pad, because on turns you can hold an exact line perfectly, instead of jerking the car in bursts. As you travel up the hill in Dinosaur Canyon, no more do you have to keep tapping right, right, right, right, right… it’s just riiiiiiiiiiiiiiiiiiiiiiiiiiiiiiiiiiiiight all the way up! If of course you had a NiGHTS pad for your Saturn and Daytona USA CCE, then you would’ve been able to experience the ease of the analogue pad there too. Of course, using a steering wheel, just like the arcade version will bring you an even better driving experience! Probably.
All up this is the Daytona USA you’ve always hoped for! Unlike some games that claim that they’re arcade racers, Daytona USA is a true arcade game bringing you an unbelievable experience you can enjoy without having to leave the house!
The 2 player mode is surprisingly good also, and though it misses some detail, and you can’t see the sky as well, it really plays great and retains the full speed of the one player mode.
Daytona USA 2001 actually appears all present and correct the first time you play, because you’ll probably be drooling over it too much to notice any bodge ups, but there are a few. Sonic, for instance on the 777 Speedway course is facing backwards, the rollercoaster from National Park Speedway is totally gone (NOOO! WHY?!) and there’s a turn missing from Desert City. Plus Jeffry takes a hike in the 2 player mode. Oh well, perhaps hes gone fishing again. The train of Desert City however is much nicer looking than the Saturn version.
Also in this version of the game, you can choose your own customised car colour schemes as well. You simply pick which part of the car you want to modify the colour of, then choose the exact colour that you want it to be. The Red Cat only has 1 part you can change, where as the Pywackett Barchetta Super has 4 changeable areas. You can save up to 3 schemes for each car, and when you select it to race with, you also get the original colour available also.
The cars are improved quite a lot from the original game as well, and look closer to that of Daytona USA 2. Its a shame Sega never put the tracks from that into this, plus Silver Ocean Causeway from the PC version of Daytona USA Deluxe, as it would have been the ultimate Daytona USA collection, but as it stands, its still a brilliant game.

All up this is personally my favourite racing game, and while it’s getting on towards 18 years ago that it came out, I still play it more than any other racing game overall. You’ll still find me racing now & then at Galaxy World in Sydney also, and I’ll challenge anyone to try and beat me on the Advanced track with manual transmission.

Graphics: Much more spiffy than any other version and excellent anyway had no other version existed. Pity about the boo boos. Probably couldve benefitted from some better road textures also 90%
Animation: Smoother than a baby’s rump!

No, seriously, this just flies along. 60 frames per second the whole way. Not all that much going on in the backgrounds besides the cars zipping past, though. 96%
Sound: Day-eee-tonaaa! We all know that one - “Let’s Go Away.” Reasonably good sound effects, nice tyre screeching noises and good clear speech. It now has more of the original arcade speech that was missing from other versions too. The music’s pretty good, although Funk Fair, and The Noisy Roars Of Wilderness, the 2 tracks from the CCE have been changed over to some new music now. 97%
Playability: Excellent. The smooth frame-rate and typical Daytona USA feel are 2 of the reasons why this is so playable. At first I was dreading a jerk-o-vision bodge fest, like Sega Touring Car Championship on the Saturn, but I was pleasantly surprised at the beautiful speed this hoons along at. Using the analogue pad of the control pad is the only thing you can use on this, as it doesn’t support the digital one. I think I said that already. 97%
Lastability: Considering that you’ll need to play this for 100 hours to unlock the “Javelin” car, it’s a damn good thing that this has a mighty high level of appeal. If you’re an arcade Daytona USA freak, then you’ll absolutely love this to death, and you’ll be playing this 25 hours a day. If not, it’s still worth getting, ’cos Daytona USA simply rules! 96%
Overall: A very high quality conversion of the arcade classic. Plus an excellent game on console too. 97%
Be sure to swing by my Downloads Page for a bonus collection of images.

• When the “Ladies & Gentlemen, Start Your Engines” screen comes up, hold the L & R Shift buttons together to get the alternate sky.

• Search through the music in the options area, and you’ll find the original arcade game choons, including Pounding Pavement. Dunno if there’s anyway to use them in the game as yet. That would be cool.

Here’s how you get the extra cars, although I’ve had a few of them for a while, so I don’t remember the exact procedures:
• To unlock the Pywackett Barchetta car, complete a race with each of the 1st 4 initial cars. Probably in 1st place.
• To get the Pywackett Barchetta Super, start up a normal race with 2 laps using the ordinary Pywackett Barchetta, turn around & complete the course backwards. This is best done on Circuit Pixie with 10 cars, so you don’t crash into too many as they come towards you, and also, it’s a short course.
• To unlock the Unicorn, come 1st at the end of the Championship mode.
• To unlock the Red Cat safety car - uh, I’m not even sure how I got it actually. Let me know if you know how I did it. Just keep driving around until it pops up I guess! ;-D I think you might have to get 20 hours of game play in.
• To get the Rule Of The 9th, get a 1st place record on every track in all 4 variations. (Mirror, reverse, mirror reverse & normal.)
• To get the Javelin car, rack up 100 hours of game play. Not really worth it for what you get, but worth a look if you’re close to breaking into that amount of time. If you can complete a race with this thing, then you’re a driving legend!

• Looking for the replays? Get them here. (You may have to “right click” and choose Save Link Target As… [or something similar.]) These are Nexus DCI files, so you need to extract the RAR file, and transfer the files to your Nexus memory doodad via the parralel port link cable thingo. (If ya wanna know how, just ask me.) Unless of course you have an alternate way of doing it. I did try to set it up for the standard VMI file download way, but I couldn't get it happening. So if you wanna see my spiffy replays, this is the only option at the moment. You get 4 in here too — one from both Dinosaur Canyon and Sea Side Street Galaxy, and 2 from National Park Speedway. Oh and of course these are only for the PAL version of the game, in case you forgot! Please send me some e-mail too if download these, ’cos I want to know how many people actually get them, if any.

 Here are my notes on how to swap the music to the original tunes: (Youll need a way to get your game onto a computer most likely with Windows to do this, and know how to get it running on the Dreamcast again too.)